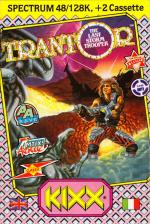 Another re-release, this time of a reasonably deserving multi-level in which a heroic star trooper takes on hordes of evil aliens. The gimmick here is that instead of being armed with your common or garden proton megablaster, Trantor has a thumping big flamethrower to see off the flying, hopping and crawling beasties, and he uses it to very good effect. You can almost smell the roasting aliens.

The problem with this game is that the action is non-stop, and the backgrounds of underground installations are quite fetching, there's little variation. All you do is run along the corridors, toasting everything that moves, looking for oxygen and fuel stations to help you get on to the next elevator. The eventual aim is to activate eight security terminals, then rearrange the code letters obtained into a phrase which will help you to escape from the planet.

Apart from the opening sequence which is very tedious to sit through after the first time, Trantor is as good a way as any as wasting a wet Wednesday afternoon.

Big sprites, lots of action but some gameplay faults.

The problem with this game is that the action is non-stop, and the backgrounds of underground installations are quite fetching, there's little variation.