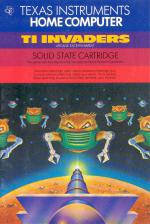 This program is a good representation of the game that took the world by storm so many years ago. There are some differences - aren't there always? - and in this case they are for the better. There are two skill levels, called "merely aggressive" and "downright nasty" which is a nice touch. The instructions are very clear and concise except for the point that the keyboard arrow keys can be used instead of a joystick.

After each screen of invaders you can shoot it out with a mystery ship on its own.

A new laser base is awarded at 3,000 points and at 10,000 points one of your demolished forts is repaired.

The graphics are good. Although they look like invaders they don't look like the arcade invaders. The laser bases are good and when one is destroyed it turns into a wreck and is lowered into an underground cavern and another will take its place.

When the invaders have ultimately won they will jump up and down with much glee.

The game is getting a bit obsolete and boring, but it's not TI's fault and this is a good game despite the limitations of the game concept.

Space Invaders as a game is getting a bit obsolete and boring, but it's not TI's fault and this is a good game despite the limitations of the game concept.