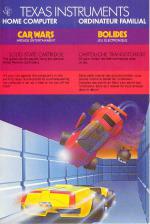 The object is to race around a five-lane track. Of course there is a computer-controlled car racing round in the opposite direction to you trying its very best to smash you up.

The lanes of the race track have four points where you can change up to two lanes. The lanes are filled with dots, which you have to run over, Pac-man fashion, to obtain points. After a user-defined number of dots have been cleared the car will speed up. The other difficulty setting is a choice of three speeds, creepin', fast and flyin'.

The instructions are good, except that they don't mention that the arrow keys can be used in place of a joystick. The graphics are quite good and the game is very fast.

The only real gripe against this game is that it is very simple and, after a while, boring. It doesn't warrant the price or to be put in a cartridge. When Commodore has a simple but amusing game like Blitz they put it on tape and don't charge an extortionate amount for it.

But aside from that, this is a well put together game with good documentation and instructions.

A well put together game with good documentation and instructions.