21st September 1987
Through The Trap Door
By Piranha
•
Spectrum 48K 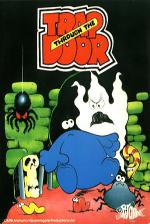 Through The Trap Door | Overall Summary

Alas, poor Boni, I knew him well. And that's as close a literary allusion as you're going to get, and the reason for it is a skull.

Yep. What have here in Through the Trapdoor is a "Rescue the skull" game. (Why? It's dead. It doesn't care about being rescued, it isn't any use to anyone really, except as an trace element in a bag of Winalot). Yoh! Berk and Drut are back. Berk being a blue thingy, and Drut being a yellow thingy. Both now big media stars. Anyway, anyway, this skull's dropped through the trapdoor, and Berk and Drut have to rescue it.

OK, so it's all a rather spurious excuse for an adventurey game by Don Priestley, with cutesy-yuk character, sweetie-puke locations and a compleete-lee ghast-lee plot. Despite my natural reticence to even load such a thoroughly ghastly, childish game, I, um, oh gosh, I quite enjoyed Trapdoor II really.

Following on from the not-really-up-to-scratchness of Flunky, gameplay-wise, TTTD has a more solid sort of basis. There's all the usual, "Go to the left and pick up the key before decapitating the bat," which requires a lot of concentration and applied minds. (All right, I found it difficult, but then I'm probably not as smart as some of you). There also an added bonus of playing both the little yellow frog and the big blue blob, so you can switch between the two and get one to carry out a task which the other one would find nigh on impossible.

All of which is pretty usual sort of stuff. But what I really liked about TTTD was, gulp, the cuteness of it all. The tasty hard bits of the game, like deciding which way to point your pooter without getting blown up (look, you just have to play the game, OK)? and the general necessity to think about what you're doing is nicely balanced by having something so completely puerile and twee to gawp at.

Don Priestley has done a nice job with Trapdoor II, although I'm not sure that a third game with equivalent cuddley-ness would be in order. Two Trapdoors I can take quite happily though, and I recommend Through the Trapdoor to anyone who has a strong stomach and an eye for a tricky problem. Roam around four underground locations, collect keys, open doors, eat sweeties, and stop that horrendous froggie jumping all over the placie and banging his headie by picking him up and squeezing him until his eyes bulge. (Tee hee).

If you liked the original Trapdoor, like the large, simple tricky problems and either are very cute yourself or enjoy spitting blood at thingies and spookies you'll probably find Through the Trapdoor worth a second look. And if you don't, you can always have fun pushing Berk down the hole and watching his eyes spin.

Horrendously cutsey came with a number of good hard puzzles to solve along the way. A worthy successor.

Through The Trap Door | Overall Summary

Horrendously cutsey came with a number of good hard puzzles to solve along the way. A worthy successor.