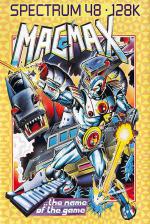 When one realises that the end of civilisation is at hand, and that there is no hope for survival, it makes sense to go down a hole and build a robot. It's not going to keep you alive, but you at least have the satisfaction of knowing that your 'droid is going to blast the hell out of the aliens after you've gone.

And that fellow star fighters, is basically the SP of Mag Max (Max being the droid in question). But there's more. Owing to sudden death, the mechanics didn't quite finish off poor old Max. So he's got no legs and no protective headgear. But never fear! It's quite easy to pick up these little necessities, once you've wasted a few of the enemy hordes.

But that's not easy. They're pretty mean as hordes go, they've got pointy heads and they walk around and fire at you. Doesn't do a lot for intergalactic peace really, but it does serve to make the game a bit more exciting.

And gosh, it's one exciting game. Some of the screens are green, and one or two of them are brown. Amazing. Mag Max is pretty enjoyable. Lots of opportunities to kill things, and progress on to higher levels, with some more things to kill. At first, as with all shoot-em-ups, it's quite tricky to get past the first row of aliens, but after a while, it's easy to suss out techniques to get you through.

As you pick up various bits of your metallic anatomy, you gain more fire power, which makes life good for a laugh. This is extra important, because there are certain aliens which can only be destroyed by certain weapons, and if you come up against one without that particular piece of weaponry, you're scrap metal.

As games go, Mag Max is pretty good to look at. The graphics are large and clear and the scrolling is smooth. The only problem that I found was on the green screen. Seeing as everything else around you is green, including the background, apart from the black bits, which aren't green at all, it's quite difficult to spot the alien bullets coming for you, and sometimes you just find yourself dying, and you never even saw them coming. The satisfying part to dying, if dying can ever be said to be satisfactory, is that if you hammer the Fire button while you're doing it (dying that is) you can carry on shooting even when you're a celestial sort of robot. And that's good for a laugh.

At the end of each stage of the game, an excessively large and evil dragon appears, which has to be bombarded over and over again with various bits of ammunition, and then you can proceed to the next level and start all over again. If you should get bored with one particular screen, you can always duck down a hole and go on to a different underground passage. In that section the 3Dish view becomes side on. You still kill everything though.

Another actually quite good scrolling shoot-em up from Imagine.

Nice fast blast with a good variety of beasties to destroy. Well worth a look at if you're a shoot-em-up fan.

Nice fast blast with a good variety of beasties to destroy. Well worth a look at if you're a shoot-'em-up fan.