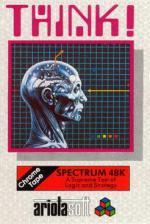 Think!, they said in the SU office. So I did. And after I'd finished thinking, about Life, the Universe and other such things, I got on and played the game from Firebird.

Think!, is not really a new game, it's a budget re-release. It got good reviews when it first came out, and it's going to get a good one from me now that it's selling for only €1.99.

It's a board simulation game. The idea is to place four of your counters in a line on the board before the computer or a human adversary does. A nice simple idea, and a nice simple game.

Playing the computer means a more taxing game, and, indeed, a greater possibility of losing. If, on the other hand, you don't manage to thrash your best friend, or even your pet hamster, then the Tutorial Mode offers helpful and friendly advice on how to win the next time.

As far as graphics go. Think!, isn't going to seem tremendously exciting. There are few moving parts, the most interesting manoeuvre being the trundling of colour counters across the board (yawn). But this is a minor fault, and you don't really expect anything more dynamic than that from a board game, do you. Do you?

Think! is, though, very neat, very slick and likely to keep the little grey cells ticking over.

Not a game to get over-heated about, but a neat on-screen strategy board-game. Simple but very effective.

Not a game to get over-heated about, but a neat on-screen strategy board-game. Simple but very effective.