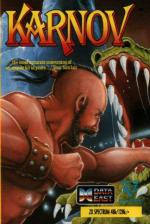 "Allo Baldy'" Just for your own personal reference, this is absolutely not the way in which to address the superhero Karnov. Not if you value your limbs and your ears, that's for sure.

Bald he may be, but there's no stopping the fat little Rusky in the snazzy red jim-jams. (No, no, get off my ears)!! Breathing fire all over the myriad of monsters which come his way, he's truly a force to be reckoned with. And he's a coin-op conversion.

Perhaps you've not heard of the coin-op itself. But just for reference the Speccy version is very close and very good.

It's not just that the Spectrum gameplay follows the original so closely that it's treading on its toes. But the graphics are absolutely marvellous. Colour is used lavishly throughout, and not once did we see an icky splurge. How? Well, Electric Dreams' programmers have employed the same technique used by Mike Singleton in Dark Sceptre, using a 'mask' to separate each sprite from the background. So, as even you daft lot can tell, merely by looking at the screenshots on this page, everything looks extremely pretty.

Enough of the prettiness, what about the gameplay? Karnov has to fight his way through eight levels, each progressively harder, collecting pieces of a map in order to find a job lot of treasure that someone very careless has just left lying around the place. On the way there are various demons to defeat, and gingernut throwing lunatics to zap. Yup. There's a guy who chucks biscuits. Coer. Whatever will they think of next?

To begin at the beginning, Karnov lands on a rock via a bolt of lightning, accompanied by appropriate sound effects. Running swiftly to the right, Karnov first encounters some sort of stalagmite jobbies, holding up a ladder, a bomb and a hunchback little yob who lobs the aforementioned biccys at you. Fire repeatedly at the bloke with the bourbons, and they'll both disappear. In fact, fire at everything that comes your way, flappy birds, skeletons on ostriches, little green men with pointy swords, fish, stone heads, trees, lions, Arabs and anything else that moves.

So there's a lot to destroy. And each of these items comes hurtling towards you like the proverbial out of hell, and if your trigger finger isn't up to the mark, then you're going to get roasted before you've even begun.

Later in the game you can add to the ladder (which can be extended and used to find choice items otherwise out of reach) and the bombs, all sorts of other goodies. Especially useful are the flying shoes, which not only allow Baldy (mind me legs)!! to fly, but also make his jim-jam botts flash red and blue and look ever so nice. Mmm. There are also fire power bolts which give Karnov extra fire power and some extra special 'K' icons which give the boy an extra oomph.

He's big, he's bad. he's bald and he's fiendishly difficult. He's smart to look at and he's fun to play. He'll give you hours of entertainment and make you cry with frustration (well it made me cry anyway). Karnov is definitely one of the best conversions that I've ever seen. The only fault that I could find was the speed, which at first seems a touch slow. But as the mad ostriches start coming at you thick and fast, you realise this was only to lull you into a false sense of security.

We've waited quite a long time for Karnov. and I can safely say that it was well worth the wait A real corker.

If fat Russians are your bag, then Karnov should fit very comfortably over your shoulder. A very close conversion.

If fat Russians are your bag, then Karnov should fit very comfortably over your shoulder. A very close conversion.