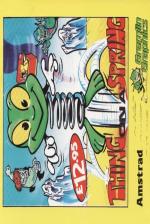 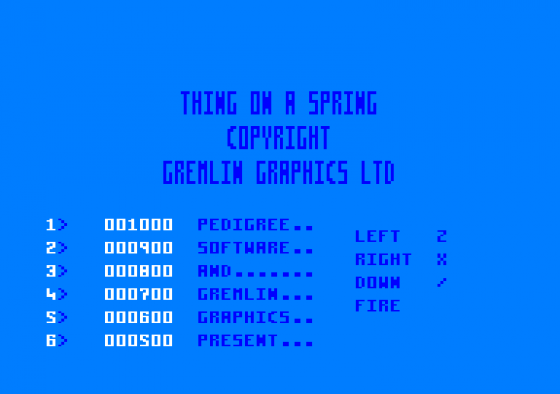 Lovely title for a real cutey of a game that features one of the most lovable computer characters yet. He's called Thing and, as you might guess, he gets about by bouncing everywhere on his springy body. He's battling against the evil toy goblin in order to destroy his reign of power.

To beat the goblin Thing has to collect nine pieces of jigsaw that will provide the key to victory. The nine pieces are spread across four levels of a toy factory, each level being composed of a number of screens and connecting tubes. Most of the rooms are in fact more than one screen long and as Thing makes his way along the screen scrolls smoothly with him. This though is where the game's major fault occurs with the edge of the screen breaking up badly during the scroll.

The rooms are connected by tubes in which Thing can take a well-earned rest from the nightmare tasks that face him. At the left hand end of the factory is a lift which Thing can use to get to any of the four floors. However, to get to all of the rooms and all the jigsaw pieces, Thing will need to collect five other objects that will give him special powers. 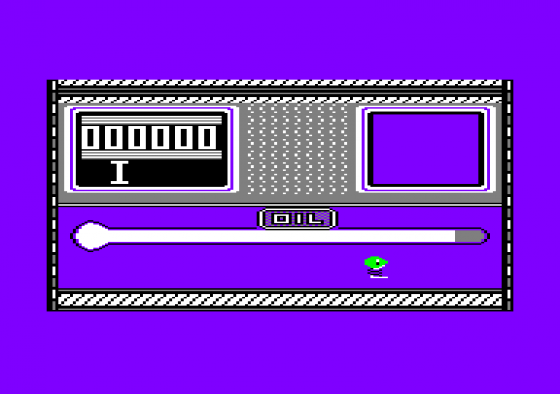 The rooms are full of platform game type obstacles and monsters that are Thing's major difficulties in his quest. The monsters all move in set patterns around the screen but their speed and type varies every time you enter a room. They can be avoided with good timing and judicious use of Thing's jumping abilities. These are his most entertaining feature. When Thing is hit by a nasty it depletes his supply of oil. This is what stops his spring from rusting up. If he runs out the game ends but top-ups can be grabbed from oilcans left lying around.

When walking Thing just hops along but pressing fire will launch him somersaulting through the air and bounce him off any obstacles he encounters. He can also build himself up for a vertical jump by compressing the spring and releasing it to rocket skywards. This is a great control mode and you'll have endless fun bouncing around.

The five objects that give Thing abilities are gift wrapped boxes and amongst their bestowed skills are the ability to use escalators and rocket buttons. Those buttons are great because when Thing treads on one he is shot up into the air till he hits an obstruction and then zips horizontally until he hits another obstruction and drops to the ground. 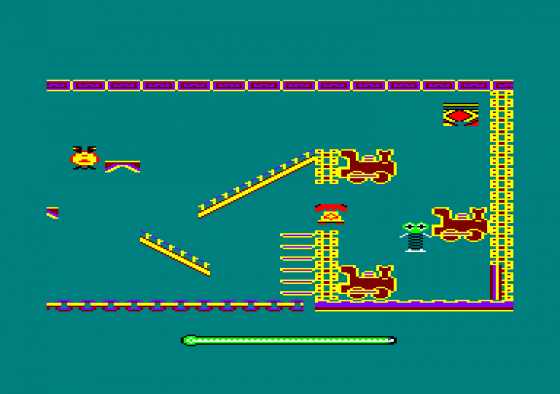 There are many other features that may help or hinder inside rooms - trampolines, slides and disappearing blocks. All the monsters, objects and scenery are nicely drawn with plenty of colour and interesting design. That gives you plenty to see and do on most screens. The sound is another nice feature of the game with a catchy beat that will have you tapping your foot throughout the game.

Once you've started playing, it's very hard to stop because Thing has such nice control and his cute persona is what makes the game special. The action is easy to get into but pretty tough to solve so many happy hours will be spent with it. The only real drawback is with the graphics. The flicker on the scrolling isn't always very noticeable but may still prove off-putting while the main character is also prone to some flicker but to a lesser extent. Some great fun that will test your skill as well.

Cutesy indeed. It's apparently very easy, but I found it difficult to get off the first screen. But I wasn't deterred - this is a very addictive game indeed. Shame about the flicker - I suspect it's something to do with frame-flyback. But you can't have everything, can you?

If you like big, bright graphics, bizarre controls and all things cute, buy this game. Personally, I hate cuteness in all its many forms - but the gameplay is so good I can just about put up with them.

Perfectly clear - but the game loses a lot without colour.

P. The cutest character ever.
P. Great character control.
P. Nicely designed screens that scroll smoothly.
P. Easy to get into.
P. Tough enough to keep you going for some while.

N. Shame about the screen edge on scrolling and character flicker.

A very addictive game featuring the cutest character ever... Some great fun that will test your skill as well. 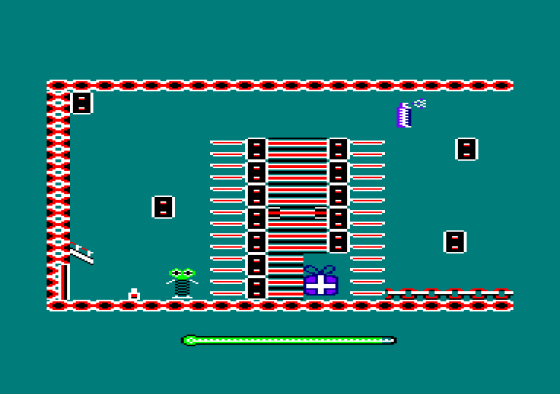