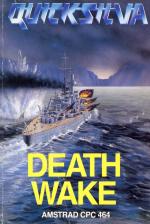 A very clever name for a game which you'll soon recognise as taking its inspiration from Beach Head. It's a multi-stage naval engagement in which you control your nation's air and sea defences in a last desperate attempt to destroy the enemy. The task is to blow up a research plant that will otherwise produce atomic weapons to win the war.

The main cog in the nation's defence is "The Undaunted", which is the only weapon capable of destroying the research plant. If you lose this, the game will end. The game starts on a map of the battle area, showing airbases, radar, ports and other installations. The action alternates between this and several arcade sequences on the way to the target.

There are three airbases on the map under your control and these can be used to attack the enemy's bases. All bases are boxes with a symbol inside. They turn grey when damaged and black when destroyed by raids from your bases. Enemy attacks can also knock out your bases so their airfields should be hit first to lessen the threat both to bases and the Undaunted. After raids have been exchanged, you enter one of the arcade sequences.

The first involves a torpedo plane attack on the Undaunted and her two escorting destroyers. The planes appear in groups of three from the right of the screen and drop torpedoes towards the three ships. They can be swerved to avoid them or you can use the three ship's guns to shoot the planes before they release the torpedoes. The escort ships can afford to be lost, although this reduces firepower, but damage to the Undaunted is the main danger. After several waves you return to the map screen for another exchange of air raids.

The second arcade sequence is a battle against patrol boats which come in from the sides of the screen and then turn towards you before releasing more torpedoes that can again damage the ship. A pair of guns are your defence at the bottom of the screen and can be moved left and right and have their elevation altered. As a last resort, you can again swerve to avoid the torpedoes as they slide menacingly towards you through the water.

These early stages are initially very difficult but once the trick to surviving them is found they become mostly routine. After another go at the map screen you have to negotiate a minefield by steering the ships through it. This is difficult with three ships so make sure it's the escorts that get destroyed if anything.

The next stage is a naval engagement with three destroyers. The display is as for the patrol boats but with the three destroyers, unmoving and large in your sights. Hitting them is easy with the guns but it has to be done very quickly or the enemy's own salvos will send the Undaunted to the bottom.

The penultimate stage is pretty much a repeat of the torpedo planes, except that they are now bombers swooping in to be avoided or shot down in the same manner. Survive that and up comes the research plant in the middle of a mountainside. Its doors are closing and you have to train the ship's guns on the hole and fire through it before they shut. Succeed and you get a big bonus, fail and you don't. Either way the game ends there.

Some of the graphics are OK and the stages are quite testing but following in the footsteps of Beach Head and the less impressive Assault On Port Stanley I don't think it will get many pulses racing.

Not much to say about this one. It's hard to summon up any kind of enthusiasm for a game as merely average as this. The gameplay you've seen before in other programs, the strategy is negligible. Graphics are quite pretty and colourful, but that's about the best I can manage, I'm afraid.

N. Once cracked, there's little to hold your interest.
N. The stages are fairly simple in nature.
N. The map screen seems to serve little purpose.

It's hard to summon up any kind of enthusiasm for a game as merely average as this.