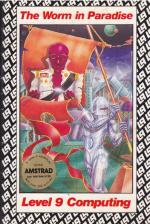 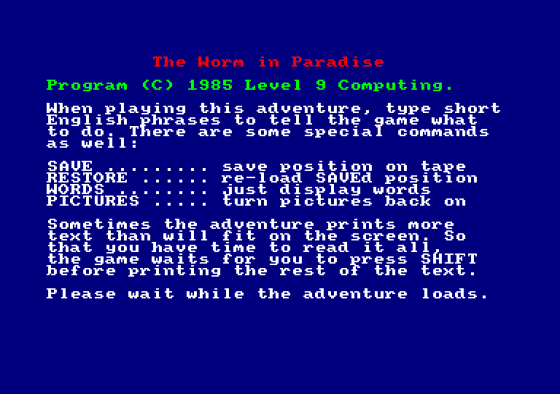 I was positively trembling with excitement as I loaded up this game. A massive vocabulary, a highly intelligent parser, and the promise of a great game with 220 graphically illustrated locations, and it's from Level 9. Can it be as good as it sounds... because it sounds out of this world!

Well, out of this world it certainly is. The third and final game in the Silicon Dreams Trilogy (after Snowball and Return To Eden), The Worm In Paradise is once more on the planet Eden. Many years have passed since Kim Kimberley's arrival on the planet, and there is now an advanced technological civilisation flourishing here - administered largely by robots, with everything for the benefit of the human inhabitants.

Life is almost never-ending thanks to organ transplants. It is also lazy - though compulsory, work is of minimal importance and involves more status-seeking than financial reward. Robots provide everything you need, and even keep the place in order. Fuzbots keep a close eye on the citizens, and administer fines if and when misdemeanours are detected.

At the start of the game you find yourself in a garden with no apparent means of escape. Four walls enclose an area of typical Level 9 beauty - roses, lillies, and a magnificent apple tree in the centre. You also find yourself staring at the familiar Level 9 graphics and wondering when they're going to sharpen their pencils a bit and start producing some decent pics. I have to admit that some of the drawings in Worm In Paradise are better than previous material, but graphics is still one area where Level 9 can't match the competition of, say, Interceptor, or Adventure International.

There's the usual imaginative Level 9 game design that becomes evident from the very start in The Worm In Paradise. The garden is only a fantasy, and within a few moves you find yourself waking up in Reveline's Dream Parlour in the heart of Enoch, capital city of Eden. There is, incidentally, another way out of the garden if you persevere - but I'll leave that up to you!

If dreams came true here on Earth as they seem to do in Eden, I'd readily plump for a holiday in Enoch. There's certainly plenty of tourist traps, from a casino complete with one-armed bandit (and I *mean) a one-armed bandit!) through to the museum, where you can ogle an inflatable plastic replica of Kim Kimberley, and the pet shop where you can fix yourself up with a cute little Dagget (an electronic dog).

Travelling around in the capital city is a bit like discovering the London Underground for the first time - you're continually getting lost on north-bound pedways, east-bound pedways, south-bound pedways, and so on. What's more, one intersection looks very like another, but with the aid of a pencil and paper you'll son find yourself feeling very much at home. You can even try and go to work, if you want, but to start with you're unlikely to do anything except wander around exploring the different locations.

All this takes place using Level 9's new system. It does have some very attractive features. First, the graphics and text are displayed in parallel, so that you can enter a command while a picture is being drawn. This is a great help if you want to move round in a hurry, but still want to get a glimpse of the scenery. If you really want to get a move on, you can turn off the pictures altogether using the command "WORDS".

Secondly, you can input multiple commands, separated by either AND, THEN or full stops/commas. This is a very flexible system - in fact, the most flexible that I can thing of (bar Infocom, of course, and Lord Of The Rings). The best thing about it is that the program really does make sense of what you're typing most of the time, so errors are few and far between, unless you're careless.

The final big difference over previous games is the size of the vocabulary. You can "LOOK" of course, but you can also "LISTEN" and even "SMELL", and that's only the beginning. Suffice it to say that I did not have vocab problems once while playing the game, which isn't surprising since Level 9 claim that the program will understand over 1,000 words. Just to put you in the picture, that's certainly on a par with early Infocom games, and about five times as many as most other present-day cassette adventures. What's more, even if you do use a word that the program doesn't understand, it will tell you why it doesn't understand it rather than simply rejecting it. For example, you may be told that the word has been used simply as a descriptive word in a location text and is not really significant in the game, or perhaps that you're trying to use a word in the wrong way. This is a big and welcome change from previous Level 9 games, which were notoriously unfriendly and said things like 'Arfle Barfle Gloop' if you entered something that wasn't in the vocab.

Even for us dedicated adventurers, I reckon there's a good few days' work here. The aim of the game is to discover your identity, work your way up in society and change the world! And there's certainly quite a lot you'll want to change. From the moment you leave Reveline's Dream Parlour you'll begin to appreciate that the pleasures of Eden are very double-sided. Try popping into the local pie shop (located in the park) and you'll see what I mean - looks delicious, tastes vile, and that just about sums up Eden society.

There's just one thing about this game that makes me uneasy. Suppose you lived on a planet like Eden, where everything was plastic and soulless. And suppose you wanted to change things. What would you do? You'd probably sit down and play a game like this one, wouldn't you?

Oh oh! It's back to Snowball time! Those of you who've played this game may well have had trouble with the colour code system in trying to find your way about. Well, believe me, that was peanuts compared to the system on Eden. Not only do you have to negotiate the pedways and roundabouts, but to get anywhere of significance, you've got to master the Eden transport network. It all works with colours, and there are 40 million possible destinations!

Aaaaaarrrggghhh!!! I get the sinking feeling that Level 9 are going to run out of clue sheets on this one. Reserve yours now!

You start the game with 100 creds and a little watch-like device to tell you how much money you've got left and what time it is. Eden may be a techno-paradise, but believe me the moulah is as important here as it is in Oxford Street! If you run out, it's a fifty cred fine for debt, and if you want to know how you pay it, just take a look at your arms and legs and ask yourself this question - in a planet where everyone lives forever by replacing their organs, where do you think they get the spare parts from? Yessir, you're worth your weight in gold in this game. Just pop along to the body bank and cash in!

The text is good - but monochrome Amstrad owners are in for seriously unimpressive graphical screens.

This is just out of this world...! Even for us dedicated adventurers, I reckon there's a good few days' work here. 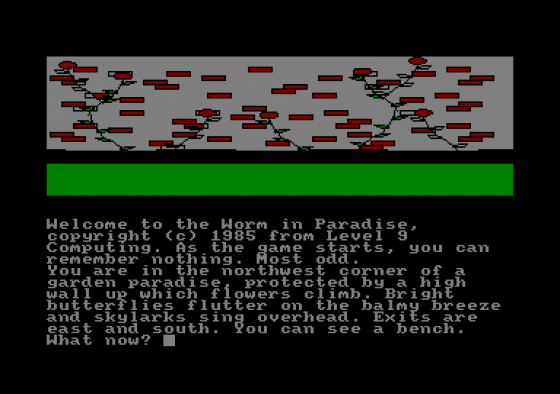