Published in Your Sinclair #48 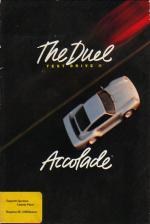 Racing games, eh? (As our Jack would start a review.) What'd we do without em? Well, we'd buy a lot fewer games this Christmas, that's for sure. Yup, from Chase HQ to Power Drift to Continental Circus, everyone's gone car bloomin' crazy!

There are some more serious driving simulations bouncing about too. The jury's still out on Hard Drivin', but here comes The Duel, Accolade's follow up to the mega-successful PC/16 bit driverama Test Drive. In fact, it's quite heart warming to see a respectable, simulation-based outfit like Accolade dipping its toes into the Speccy market this late in the day. So it's a real shame I can't bring myself to write anything very nice about the results. Because, to be honest, Test Drive II smacks a bit of old tosh.

Oh sure, the blurb promises something a bit special. Race head to head in the fastest production cars ever built! Wow! A choice between a Ferrari F40 and a Porsche 959! Road hazards like 'oncoming traffic, rocks, loose gravel, pot holes and oil slicks.' Hot diggerty-dog! Can't wait, right?

Well, let's kick off with the graphics. They're just so lifeless! Take the courses. (No. please, take them!) In general they're some of the most flat and featureless routes I've ever seen, be they desert, cliff paths or grasslands, with the very minimum of roadside features (outside of the odd cactus). And the cars are no better. The dark blue dashboards are modelled on the cars in question but, in fact, both look far more like the plasticy job from a Nissan Sunny or something. And what are the roads populated with? Not trucks or Beetles or Corvettes or anything else vaguely interesting, but more blooming three box saloons! Even when you're racing the other supercar the graphic used is just that of another Nissan. In short, you'll have to use your imagination a bit here!

Thankfully, the control system is considerably better. You're given a wide range of skill options from easy to really hard, the first four of which use an automatic gearbox, with the more difficult ones on manual. Actually, there's not much point in playing it on auto at all (too little to do) but on manual things warm up a bit. In fact, they warm up a trifle too much - fail to change up in time and your engine explodes! Yikes! But - and it's a very big 'but' - even at the simplest level your motor is damn near uncontrollable. To even stay on the road (staying in lane is pretty impossible) takes a million tiny corrections. So it's totally unlike 'real life'.

These are, however, but petty crimes compared to the two main holes in the thing. For a start there is no real impression of speed - not even a little bit! Unless you've got your eyes pinned to the speedometer, it's near impossible to tell how fast you're meant to be going. The clock will climb from about 15 to 105 mph in seconds and suddenly you'll be going too fast to take a corner - though it sure doesn't 'feel' like it. Again, totally unlike the experience of driving a real car, where you only need to check out the speedo occasionally.

And then there's the collision detection. It's hopeless. You'll crash into a cactus when it looks like it's, ooh, a good 20 feet away. Apparently the computer judges whether you'd hit it or not within the next frame of animation or something and freezes you there, which leaves the offending object sitting there smugly, miles from your bonnet. How frustrating.

And that's it really. I keep going back to the game, thinking it can't be that bad. Maybe I've just been unfair. Maybe, once you get into it after you've got used to all the frustrating peculiarities and learned just how far from the other cars you need to be, it all comes to life and becomes playable. After all, the 16 bit Test Drive took a bit of getting used to. But I doubt it. If you're buying a racing game this Christmas there must be at least seven better ways to spend your cash.

Dull to look at and dull to play, with no real impression of speed, frustrating collision detection and a half-baked feel.

Dull to look at and dull to play, with no real impression of speed, frustrating collision detection and a half-baked feel.