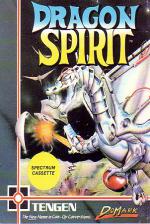 Hmm. Vertically scrolling shoot-'em-ups - you don't get many to the pound on the Speccy, do you? Thinking back, there's only been Xenon this year worth mentioning - well, that and Gemini Wing I suppose. (Quickly remembers Gemini Wing.) Nope, I was right the first time.

So I wasn't really holding out too much hope for Dragon Spirit. Domark's Tengen conversions have been a bit up and down in quality so far, and since APB wasn't too bad this month I thought we might be due a crap one. After all, vertical strollers are traditionally hampered by a couple of hard-to-avoid faults like a small play area and confusing backdrops (see box off) which don't help.

Here we are then, having loaded up Dragon Spirit, and is it crap? Well, no, it's not actually. There's a big block of icons and a picture of a dragon on one side, as expected, but they've managed to turn the play area into a portrait shape without really eating up too much of the screen. At the bottom you've got the main sprite, and, well, you're going to have a game called Dragon Spirit you may as well have a good dragon.

This one's a fine specimen. Good and big, he's also animated rather nicely. As he flies along his wings flap and his body moves from side to side in, erm, dragon-like fashion. Swing him to left or right and his head moves and you can see he's actually steering with his tail. Nice one.

Anyone who's played this type of game before will know it's just a case of blasting the waves of baddies that come at you down the screen, destroying the fixed gun emplacements and battling big end-of-level monsters. It's all done quite neatly and turns out to be very hard - though Domark assures us it's not as bad as the coin-op, which was murder!

Most of the baddies are suitably lizard-like, from the funny icon things that turn into (very fast moving) pterodactyl-types, through the ground-based dlplodocuses you can bomb (they don't just wink out of existence, they turn into charred skeletons) to the bullet-firing Loch Ness Monsters.

The bombing process is a bit tricky though. If you're playing on a keyboard, fine, but with a joystick you have to reach over awkwardly to the space bar with your elbow to try to get the ground-based baddies, 'cos the fire button only works your air-to-air prey breath. Basically without the bombs you're scuppered 'cos there are so many ground-based baddies - my solution was to balance Jackie's pitta breads on the space bar to get it firing constantly. Maybe you'll come up with a better idea.

Otherwise, the game is pretty much as you'd expect. There are eight progressively difficult levels, and various add-on weapons to collect too, only in this case they increase the amount of firepower you have literally (you are a dragon aver all) by adding to the number of heads you've got. Get the full set (three) and you're really cookin'.

And there you have it. A very respectable, very tricky progressive scroller. Apart from the annoying bomb control (I would have preferred the joystick fire button to operate both weapons at once) it's pretty hard to find serious fault with it. Much to my surprise, Dragon Spirit really won me over.

Much to my surprise, Dragon Spirit really won me over. A tricky progressive vertical scroller with some nice touches.