Published in Your Sinclair #45 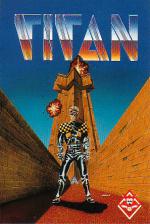 Hey, Jackie, what's this Titan thing remind you of? Hmm, thought so. David, Dunc, what do you two reckon? You think it's a bit of a Breakout clone too, eh? Hmm. Titan is reminiscent of the bat, ball and bricks classic alright, but it's more of a variation on the theme than a straight copy, and a very speedy, smooth and playable one at that!

So, how's it all work then? Well, erm, you do control a little square bat, and you do have to bounce a (rather large) ball around and, yes, you do have to knock out blocks until you've wiped the screen clean. Hmm. So far, so Breakoutish, I have to admit. So what's the difference? Well, for a start, the size of the screens, or to be more accurate, 'play areas'. They're big (big! big!), often about four screens big in fact, and in later levels up to about eight screens or more.

This doesn't create too many problems though, 'cos the game scrolls very quickly in all four directions as it follows your bat about. It doesn't follow the ball though, so this can bounce off into some far corner of the play area and have to be tracked down. This can be good (your ball may be taking out a few blocks as it bounces) or it may mean you suddenly find yourself dead for no apparent reason. Why? Well, to complicate things in the same way that those falling icons did in Arkanoid, Titus has introduced 'Death' characters to the game. These kill you whenever they're touched by either the bat or the ball. Often they are trapped behind groupings of bricks so, once you start to knock the wall out, it is very difficult to keep your free bouncing ball away from them. Another complication comes from the blocks that your ball can't harm and which need to be knocked out by the bat itself. It's also a big game for another reason. Did I tell you how many play areas there are? 80. 80!! Are you getting a fair amount of game for your money or what? (Clue - yes you are.)

But it's not all roses. For a start, though the game is one of the smoothest strollers I've seen, the graphics are more 'competent' than stunning. It's really ever so simple and blocky. For instance. none of the bricks are individually defined (unlike in Arkanoid, say) so you are knocking out chunks of a whole rather than individual tiles. The bat, while fast and smooth moving, is rather small and often moves in large jumps, steadfastly refusing to hit the ball at the correct angle to go in the direction you want.

You can imagine the thinking that went on behind Titan. Titus has taken a look at Arkanoid or whatever and thought "How can we make it a bit different? I know, why not do each level over a number of screens?" Well, fine, it is a bit different and at the same time retains a great deal of the immense playability of those other bat and ball games. I'm far happier to see this variation than another straight clone, for instance. But, and it's a fairly large 'but', the simple one screen design of Breakout is still superior. In this version it's simply frustrating having the game finish for whatever reason (your ball hits Death or something) and have the action take place totally off-screen. Not only that, but there are simply too many bricks to destroy on too many levels, and, without the laser add-ons that helped speed up Arkanoid, it takes an age to clear some of the screens, even with skill playing. Still, it's quite a neat little game and easy to recommend. In fact, so easy I think I'll recommend it. Simple to play but difficult to master, so why not go and buy it?

Take a bit of Breakout, a pinch of Arkanoid and a touch of the Batty's, add some fairly original twists and serve. A very playable little concoction.

A bit of Breakout, a pinch of Arkanoid and a touch of the Batty's, add some fairly original twists and serve... A very playable little concoction.