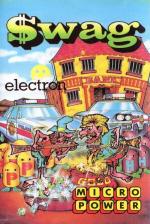 This is a strange game that is more likely to be an acquired taste than an instant hit.

It is unusual in that it is a two player game and only really begins to work when you complete against another player. I find that the computer is almost unbeatable in the practice mode.

The aim is to steal £250,000 before your opponent. What are we teaching our children? This is done by collecting gems that appear on the screen and taking them to your hideout.

The difficulty comes in the form of the Killer Droids hired by the insurance companies to stop you. They force you to drop your gems and return home if you get caught. Added to this there are the police cars that follow you around if shot at, gold to buy more ammunition for your six shooter, Smileys who send your opponent away, cans of beer and the DH, the purpose of which eludes me.

In all, this is a complex game that takes some getting used to but which can be great fun if you have an opponent.

A complex game that takes some getting used to but which can be great fun if you have an opponent.