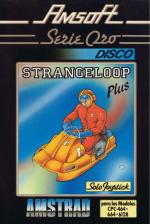 This is still the same basic game as the tape version, with a 250 screen hi-tech factory which you have to shut down by completing a difficult arcade adventure. The factory is full of machinery and dangers that have to be avoided while trying to solve puzzles that will allow you into the control room.

The hero makes his way between screens either on foot or on a jet cycle and will encounter three general types of objects: moving ones that may prove instantly fatal or just produce slow leaks in his space suit, objects that replenish his oxygen, suit patches, gun charges and fuel, and objects that appear in a "pocket" and have to be used to solve puzzles.

The puzzles will take some little while to work out but there is no lack of things to do or see while you're struggling with them. The disk version differs in only one respect to the cassette and that is that there is an extra section added on. We won't tell you where or what it is - that would spoil the surprise. But you'll need to find it to complete the game and it will be a real thrill when you do.

250 great graphic rooms... Will keep you hooked and guessing for ages.