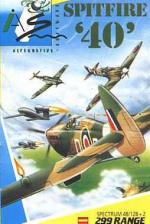 Yet another rerelease - where did all the new games go? - this time of an ancient (1985) Mirrorsoft flight sim. Yes, it's back to World War II, complete with banter, enormous moustaches and chaps called Boffos and Pongo. Sadly for the Binkys and Boffos in Spitfire '40, however, this sort of game format (if 'game' it truly is) has long since been mastered by those flying jacket types at MicroProse, and this one looks a little tatty in comparison.

That said, it's not bad value for three quid (although two quid would have been nearer the mark). After all, you get eight pages of instructions with the blighter, so there's go to be something to it. But any game that differentiates in the controls section between playing on a Spectrum keyboard and playing on a Spectrum + keyboard has got to be something of a dinosaur, and Spitfire is suitably wrinkly.

Not even a hastily applied bit of Oil of Ulay would make much difference - euthanasia would be infinitely kinder. A close decision, but down onto the pavement it goes!

It's not bad value for three quid but such a wrinkly old game that not even a hastily applied bit of Oil of Ulay would make much difference - euthanasia would be infinitely kinder.