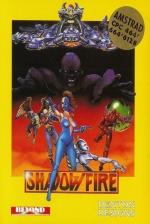 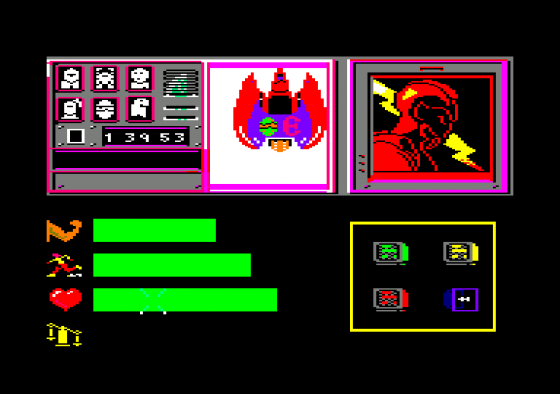 At last, at last - the most delayed game in Amstrad history has arrived to give icon adventurers a real work out. The icon system and gameplay aren't quite so original these days but there's still plenty to get to grips with.

The action takes place aboard a space-ship, the Zoff 5, where ambassador Kryxix is held hostage by General Zoff. You con-trol the Enigma team as they try to rescue Kryxix, capture Zoff and capture or destroy the spaceship. The team is composed of six members from various races and with dif-fering special skills.

The leader is Zark Montor, a human and expert in weapons, unarmed combat and translation. The only other human is Sevrina Maris - the only woman member of the team - who specialises in picking locks. There are two droids, Manto and Maul who respectively control the transporter and weapons systems. Syylk is an insectoid with mighty fighting powers and a hatred of Zoff. Torik is an avian who serves as a scout and expert in explosives and weapons. 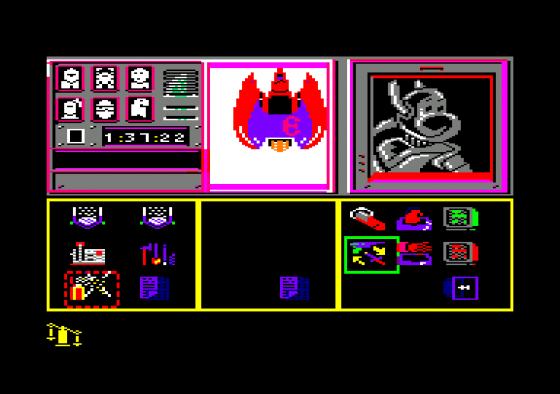 These skills will all be needed on the mission so you'll need to find out who does what best in order to achieve success. The team start on their own ship and have to arm themselves and collect useful objects before being beamed onto the Zoff 5. Once on board, they can start exploring and discovering what secrets and dangers the ship holds.

The screen display is split into two with the top half providing a constant mission command screen and the bottom half being used for various menus and options. The command screen icons show the status of each team member, a view screen of the ship area where the selected person is and a picture of the currently selected person.

A character is selected from a team screen and then has four icon menus from which to choose. The first one is a status screen from which the other three are accessed and shows the characters agility, strength, stamina and weight. These may change during the mission depending on what the character does.

The other three menus are for movement, objects and battle. Movement simply allows you to move around the ship using arrow icons, except of course where you encounter locked doors or hostile characters. The object screen lets you to manipulate the objects in the game allowing you to pick up, drop, activate and ready them for use. The battle screen controls the fight action for the character so that when con-fronted by an enemy they can attack, defend or retreat. They can also scan adjacent locations to identify the characters in them.

Once you've got to grips with all these icons, characters and scenario you can actually discover what the gameplay is like. The icons can be operated quite speedily but on the whole there is no sense of action or excitement as the characters roam the ship. There's a lot of depth to the game and it will take a fair while to crack but the adventure element has got slightly lost in the concentration on icons. You'll need patience to get the full enjoyment out of this game.

Icons!! Who needs 'em?? Not me. Too much attention is paid to the trendy control menu and not enough to the actual gameplay, which turns out to be less than exciting. Who cares if ambassador Wotsit has been captured? Who cares if Dino Zoff rules the world?

P. Good screen and icon design in lots of attractive colours.
P. Icon and multi character control add to the gameplay.
P. Lots of depth and difficulty.
P. This is not a hallucination - the game is coming out.

N. Difficult to get to grips with.
N. Gameplay can be very slow and unexciting.

Icons are a bit murky, but the game's still playable.

Good screen and icon design in lots of attractive colours. Lots of depth and difficulty. 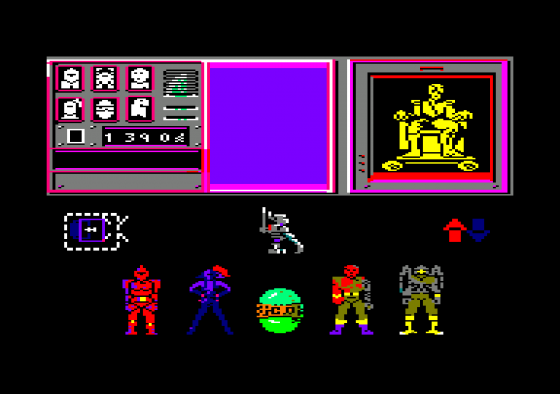