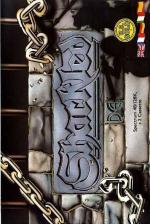 The eagerness with which each new Gauntlet clone is greeted never ceases to amaze me. After all, the original is still the best, and if you endlessly blasting hundreds of boring sprites on countless similar levels, you might as well stick with the devil you know.

Mind you, Shackled has a lot going for it. Apart from the Commodore 64 version where both the graphics and sound effects are truly dreadful, it looks good; and there's a little more variation to the gameplay than you'd find in Gauntlet itself.

The plot's pretty straightforward. Your comrades-in-arms have been captured by the forces of evil, and chained up in cells situated in a labyrinthine castle. Your task is to save them, fighting off the enemy monsters as you go.

The scenery is seen from a top-down perspective, pretty similar to that of Gauntlet, but rather than a lot of open space there are large areas full of narrow corridors. As you find cell doors, you open them with magic keys (conveniently left lying around as usual) and enter the cell to rescue your chum.

Each friend carries a special weapon which can be used against the baddies, which include knife-throwing ninjas, giant ogres, energy-draining blobs and archers.

Your extra weapons include knives, arrows, balls of fire, shields and speed-ups.

You'll need the speed-ups, because lovely-wovely though your friends are, they don't half slow you down as you try to make for the exits. If you reach the final door on each level, you get through to the next and earn bonus points according to the number of people you've saved and the number of enemies snuffed out.

Although there's no strategy as such involved in Shackled, there's a certain style of play which you have to adopt if you want to survive. Move fast, hit hard, don't get trapped in corners, and watch yourself as you traverse narrow corridors. Because the scenery scrolls in four directions, it's easy to run into a squadron of archers hidden, say, off the top of the screen.

While the characters and effects (such as jets of flame) on the ST version are very artistically designed, the background is a bit of a disappointment, featuring large lumps of unvaried colour. There also isn't enough variation between levels, though I admit I haven't completed all 112.

Fast moving and imaginative, then, but not perhaps original enough to sustain your interest in the long term.

The Amstrad CPC version is almost (but not quite) as poor as the Commodore 64; the characters are bland, the sound effects unimaginative and the backgrounds similarly afflicted by big blank blocks. All the versions have a misleading error on the packaging; the ST screenshot is labelled "arcade version" and vice versa.

The Amstrad CPC version is almost (but not quite) as poor as the Commodore 64; the characters are bland, the sound effects unimaginative and the backgrounds similarly afflicted by big blank blocks.