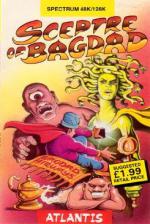 A chubby Caliph in the Middle East is having a spot of bother. On the first day of each year he must produce the 'Sceptre of Bagdad' to show his people that he is fit to govern their land. However, on one such occasion the Caliph has woken early, feeling decidedly strange. After a quick bodily perusal he discovers that he has shrunk to tiny proportions. Desperately he climbs from his bed, and clambers up to the Magic Lamp that sits upon his dressing table.

Vigorously rubbing it, he awakens and consults his Magic Genie. In answer to his questions, the ever helpful phantom tells him that he is the victim of a spell, cast by a wicked wizard. The Caliph's home has now been turned into a puzzlesome palace of shark infested rivers, burning deserts and seemingly impenetrable barriers.

The Sceptre is at the far end of the palace, if it is not reached within the ordained time the Caliph's reign will come to a premature end. The Genie promises to help, but his aid is limited to advice as he cannot leave the lamp. Therefore the Caliph begins his quest alone.

The corpulent ruler can move left and right, jump upwards and pass through doors and other entrances. Objects found en route are collected by simply walking over them. Only two objects can be carried at once, the last acquired being displayed at the bottom of the screen. An inventory of items carried is accessed by pressing the space bar.

Sections of the palace and its grounds can only be crossed if the Caliph is in possession of certain objects - the coconut is needed to cross the desert, but the sling and pearl are first required to get the coconut!

The Genie gives a cryptic but useful clue when his lamp is rubbed with the hankie. His patience is limited though - rub too hard and you end up with a clean lamp and no additional information.

If all of this wasn't bad enough, the poor Caliph finds that his palace has been infested by vicious creatures and monsters. Should these beasts touch him, the podgy ruler's life force is diminished until he eventually loses one of his three lives. Turbans at the bottom right of the screen depict the Caliph's remaining lives.

A reincarnation potion is hidden in the palace, saving the player's position when drunk. This position can then be returned to by selecting the 'Old Game' option on the main menu.

'ATLANTIS have come out with another budget game, 'Ughh!!' I hear you say . . . but wait, they've really pulled their socks up, this is decent. I always like original gaffes, and this is one of the best I've seen for a long time. The well defined graphics move smoothly, but the game could do with a tune and a few more effects during play. The difficulty involved heightens the compulsion to solve the problems, recommend this to you who've got a quid.'

'Sceptre of Bagdad puts a lot of full priced software to shame. I'm not sure that the gameplay will appeal to many people, as some of the problems are hard even when a solution is provided - then again many players thrive on that sort of masochism. The graphics are good, but the abundance of static characters gives a lifeless feeling. This is a must if you're an 'If at first you don't succeed' fan - especially at the budget price.'

'Sceptre of Bagdad has pushed ATLANTIS into the world of big time budget software. There are a lot of problems to be solved, but thankfully this process has to be carried out logically. The graphics are very g attractive and colourful, and though there are problems in this area, they're not bad enough to put you off. The only thing that this superb product lacks is a decent title tune-so, for £1.99, Sceptre of Bagdad is a steal.'

This is a steal... The graphics are very attractive and colourful, and though there are problems in this area, they're not bad enough to put you off.