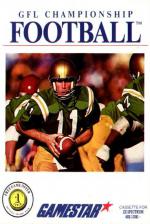 American football is a game in which well-padded men wearing moped helmets chase after a rugby ball. Fragments of intense activity are followed by deserts of intenser tedium.

Now you have the opportunity to participate in the rough-andtumble of this game. as American as Mom's apple pie, a half-eaten Big Mac and an Oliver North Congressional testimony.

In Gamestar's simulation you select two teams from a choice of 28; the ability of each 11-member team is summed up in terms of its coach. quarterback and other crucial players, and used by the computer in controlling its own men. Choosing both your own and the computer's teams, you effectively have a fine-tuned skill level. (There's also a two-player option.)

One side is designated offensive (attacking) and the other defensive. The offensive side has tour opportunities - downs - to take the ball forward ten yards, using its chosen strategies. And if successful the team has another four chances to do the same.

But if the attackers drop the ball, are successfully tackled or take it out of bounds, the down is over. When all four downs have been used up, the other team takes the offensive role.

Every game begins with a kickoff. Moments after the kick, the perspective changes to that of the opposition kickoff-returner, who catches the ball.

When the ball has been kicked off and returned, both sides try to take the ball into their opposition's end zone, the area in front of the goal posts. If you succeed, you've made a touchdown worth six points. After a touchdown, there's another kickoff and it all starts again with another four downs.

Points can also be earned from field goals (kicked from a distance, they're easier than touchdowns and only give you three points), and there's a one-point bonus for kicking a goal after touchdown.

In game mode, the screen shows the field from the perspective of the attackers, with defenders constantly adjusting their positions and flinging themselves forward to tackle the runner or ball-carrying man.

Each side chooses its strategy in scoreboard mode from a selection of coordinated team movements known as plays. Plays - with names like nickel left, safety blitz, blast right and streak left - are chosen every time a new down begins. They must be selected within a specified time, or a penalty is incurred.

Some plays are good for gaining quick yards, white others give you the chance to progress even further into opposition territory. Lines on the pitch indicate the ground being covered, and after each play the number of yards needed for a touchdown is shown.

If the action becomes too hot, a team can call a 'time out' which temporarily suspends play.

The two sides compete over four periods of either four or seven minutes each. The team with the greater number of points at the end of the last period is the winner.

'Talk about instructions - there's reams of them, which could almost put you off this game. And then there's the horrible green background to the first option screen and the field. it's like someone beaming a torch in your eyes (not a game for the early morning, this). GFL Championship Football may appeal to Americanfootball fans, but counting steps to make a play and having to get the defence line-up exactly right is a bit of a downer for the first-time player. Losing is never very rewarding, but in GFL Championship Football neither is taking part.'

'The trouble with sport simulations is the mass of instructions you have to read through before you can even understand how to get into the game! And in GFL Championship Football, the reward is belowaverage graphics (no detail, not much colour), difficult menus and hardly any sound. Once again, I'm not very impressed by Gamester's product.'

'GFL Championship Football puts the player right on the field. That's a great idea, making the sport more attractive to newcomerS. but sadly it's let down by an appalling option method. Play is great fun and very addictive. but the slow menu system makes it very awkward to play fluently. Still, the action graphics are well-drawn and move around in convincing formations. The combination of Superbowt's option technique and GFL Championship Football 's graphics would prove a winner - we'll just have to wait for the ultimate American-football game.'

Play is great fun and very addictive but the slow menu system makes it very awkward to play fluently.