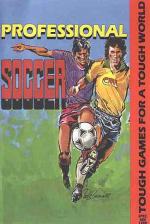 In a way it was kinda inevitable that someone sooner or later would feast their eyes on Football Director and decide that it was ripe for picking. After all, footie games are big bucks in Specland, and FD, considering its humble Basic background, has been phenomenally successful - as regular Clinic readers will be all too aware.

And who better to do it than CRL. Not a company with which one naturally associates high quality product, CRL does nevertheless pull the stops out from time to time. Last year it was Sophistry, a brilliantly clever and fearsomely addictive puzzler. And now, appealing to very much the same sort of gamer, here's Professional Soccer, a game that can easily be summed up as Football Director with knobs on.

The story is much the same as usual. You're in Division Three (fortunately Div Four has been conveniently forgotten) and it's the start of the season. You've got a bit of cash - 100,000 smackeroonies in fact, but as boot fans know, this is but small change in the wild and wacky world of football - and you've got 18 players of varying abilities to work with. The players you get depend on the club you choose, and all 20 clubs in the division are rated between one (useful) and five (rubbish). This naturally means that you'll win rather more games with a one-rated team than a five-rated team, bit you have a performance target to live up to as well - and that's higher for the better teams. Fail and you're fired - succeed and you get another season's contract.

Each player is rated not only for his main skill (attack, midfield or defence), but also for the other two - so if you need someone to cover for an injured player, for instance, you know who to move where. Most of the other FD features are here - the long drawn-out results service (this one in fact seems even longer), the slow ticking through the game, the transfers and all the extraneous detail that games like this depend on so completely. One things that's been dropped is the money problem - all you have to worry about is buying and selling players, and then making sure you play the right ones in the right positions. Extras include a choice of tactical formations (many players are also specialists in the centre of the field or playing wide), and information not only on your players but all the others in the division as well (as in FD, most of these have the same names - in this case, Speedie and Dexter).

As with the very best 'dry' footie sims (as opposed to the arcadier Match Day games and the like), there's no action to speak of, and you're not required to exercise your joystick finger at any stage. If you want to, though, there's an 'ACTION' toggle which lets you see some of the more exciting moments in the game. This is all right for a while, but it slows the game down even further, and besides, the movement of the players (all apparently of Asian extraction, and to a man, wearing turbans) is so completely unlike that of normal footballers that it's of no real help to you at all.

The graphics and 'looks' of the game are of course way beyond the black-and-white minimalism of FD. There's a fair amount of mucking about with icons, which takes a little getting used to, but there are so many more options here that it's probably not avoidable.

Ah, but is it better? Will this supplant FD in our hearts? On balance, I don't think so. While it's ironed out many of the earlier game's faults - drab presentation, insufficient info on players, game-crashing bugs - it has also taken away some of those little touches that made FD so special. And although in many ways it's more difficult, it's also somehow less challenging. I miss the money problems, the charts of how many games people had played and things like that. And it does become irritating to have to press about two billions buttons to find out how long someone is going to be injured, instead of just calling upon one of the menus.

But these are quibbles. Professional Soccer is a worthy attempt to update Football Director, and as such, it's streets ahead in gameplay of it all too numerous competitors. Although anyone who likes a little action in their gaming will probably enjoy this as much as being trussed up and fed to the crocodiles, many FD fans will lap it up.