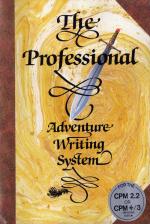 Pat Winstanley, ex-editor of Adventure Contact and regular columnist in our sister magazine ACE, checks out the Professional Adventure Writer (PAW) from Gilsoft

Gilsoft hit the adventuring headlines several years ago with the introduction of The Quill, then as time passed they introduced a whole range of 'add-ons' (e.g. Illustrator, Patch and Press). Now, Gilsoft have revamped the range, rewriting it, integrating the various bits and pieces into one package and adding refinements which make it the best system on the market for Amstrad disc machines.

Running under CP/M, PAW consists of a compiler and an interpreter. Unlike other utilities, PAW allows you to write your code and text using an ordinary word processor, which makes editing a doddle! The compiler is then used to link all your ASCII source files together and produce another file which in turn is interpreted to produce either a test version or a runnable game.

If you've used The Quill or The Graphic Adventure Creator before, you will find a difference in the handling of PAW. While editing is simple and fast, compiling is rather slow - about three minutes for a 30K file, and as you must compile all the source files every time before testing the game, things can become rather tedious...

Still, beggars can't be choosers and there's plenty in this package to have you begging Gilsoft to send you a copy! For a start, the available memory is around 60K and that's before you use the 40% text compression system! The full parser, which recognises nine significant words of a player's command, is outstanding, while the ability to create subroutines within the condition tables gives you the flexibility to do virtually anything you like.

Each object can be individually weighted, used as a container, automatically taken, dropped, worn or removed and a "doall" (do all) command allows you to create other automatic routines to suit your game (e.g. throw everything at the advancing army!).

Interactive characters are simple to create using the subroutine facility - you can even set up reasonably complex conversations!

As for text handling, life couldn't be simpler! Any word processor which creates ASCII files can be used, but Gilsoft have thoughtfully provided a simple text editor which is ideal for small adjustments to syntax etc when the compiler throws up an error. The best thing is that code is edited in this way too! Text size (e.g. messages and locations) for a particular entry is unlimited, bound only by the overall memory available. Who needs graphics? If you're a graphics buff though, these are possible using the "EXTERN" facility which allows you to patch in your own routines, and opens up tremendous possibilities.

PAW also runs on the PCW machines, providing an extra market for writers intending to sell their creations. It is simple to use (especially if you have some familiarity with The Quill) and has so much built in that most of the programming has already been done for you. PAW is flexible enough to suit the most ambitious writer. An excellent product - well documented and well worth buying!