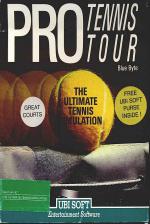 Since the French are totalement merde at le tennis, you wouldn't think Ubisoft's Pro Tennis Tour would be anything to fall in love with. In fact you'd think it would Borg the pants off you. But net at all - in fact as you play it, it gets Becker and Becker.

OK, that's all the puns out of the way in the first paragraph, apart from the one about balls. Pro Tennis Tour is in fact a very realistic, very flexible, very comprehensive and very pointless tennis simulation.

Why's it pointless? just because there are almost as many tennis games out there as there are football games, and every year a new crop appear with tiresome predictability whenever it's Wimbledon season. PTT is good, but not so good that I would have thought even the most fanatical tennis simulation collector (and are there any of those?) would feel obliged to dash out and buy it.

The big gimmick is that rather than just playing one opponent, you get to work your way up through the ranks at various tournaments. Melbourne, US Open, Wimbledon - starting as 64th and aiming for the World Tennis Championship. A score table shows you your ranking between games, and there are various skill levels (in the early stages at least).

The best aspect of the game is that it's fast - with all too many tennis sims it's a matter of smacking the ball, then going off and having a glass of Robinson's Barley Water while you wait for it to float to the other side. In PTT, although the animation of the players doesn't feature quite enough frames, the ball moves quickly, demanding fast reactions. In Easy mode, when you serve, the ball always goes over the net - all you have to do is hit Fire and aim a crosshair at the right side of the court. A small black marker shows you where to position your player to return the ball, and you don't have to be precisely on target to hit it. On more advanced levels, all these aids disappear as fast as Jimmy Connors' equilibrium at match point.

The rules of the game are as incomprehensible as the real thing, but you always serve first, and you don't change ends of the court. Different types of shot - lobs, volleys, drop shots - are selected automatically according to your position, movement, and aim; the computer also determines the spin on the ball according to the type of surface you're playing on, ball speed, and so on. Little line judges sitting one the sides of the court wiggle their fingers to indicate decisions, and a score display appears at the bottom of the screen between services.

You can save a tournament at any stage, and there's a practice mode in which you can hone your serving technique, or test your return skills against a serving machine.

Oh, and the pun about balls? Well, I'm sure you can make your own up, I can't be bothered.

Competent but uninspiring tennis simulator. Not actually that much 'fun'.

Competent but uninspiring tennis simulator. Not actually that much 'fun'.