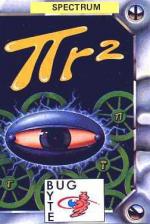 An odd game, this, which never really found its niche on initial release - too strange for the general market, probably. Your task it to search through the inner workings of the mind - represented here by a series of touching wheels - to extract certain mathematical formulae - like ?r2, for instance. If this sounds hopelessly dull or cerebral (good word, eh?), well it ain't. Symbols are to be found in the centre of the wheels, and you travel around the edges trying to pick up the ones you want in the order that you want them (you grab 'em by doing complete circuits of the wheels in question). There are hazards, including old little nasties that whiffle swiftly around some wheels' perimeters, and the whole is somehow quite addictive, in an odd, offbeat sort of way. But then the game's really only another collect-and-dodge multi-level arcade adventure in sheep's clothing - just substitute wheels and cogs for platforms and ladders. At eight quid, though, it did seem overpriced - but at two, perhaps it has found its niche at last? A neat little brainteaser.

It's really only another collect-and-dodge multi-level arcade adventure in sheep's clothing - just substitute wheels and cogs for platforms and ladders. But it's a neat little brainteaser.