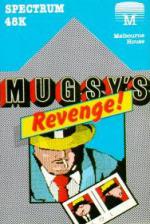 Hey, boss, come quick - I tinks I got news for you. You know dey said Mugsy was expected back in town. Well, here he is. An' you said you toit he was never comin' back.

Seems he ain't exactly got smart while he wuz in de slammer. Oh sure - yes - he still looks great as ever. A real snappy dresser - but, boy, does he take forever to look pretty as a picture. You'd tink nowadays that they could hide all de time he takes to appear in public. Reminds me of how dat Hobbit gang used to just sorta get filled in whenever dey came on de scene - hey boss? Hur - hur - hur!

Yeah, but lookin' good don't make up for a lack of brains, like you always tell me, and Mugsys commands remain strictly monosyl.... monyslyb.... one word at a time. You see, he tinks de smart ting to get into is booze, and he's got dis henchmen who says tings like 'How many boys da ya wanna hire, 0, 1 or 2?'. Ha, da dummy can't even speak good English! So Mugsy sits dere, mumbling dese answers wid all de chutzpah of Marion Brando on downers, an' dependin' on his decisions he can watch his fortunes grow or go.

Of course, it's never so simple as dat and dere are rival gangs to be considered and booze parlours to buy and molls to keep de customers.... satisfied. And even though he's payin' off do Feds he'll still get trouble if they're not satisfied. Seems dis sidekick of his ain't too hot wid a rod, so Mugsy has to do all his own shootin', and' hang me, if it ain't like some penny arcade amusement, and none too difficult at that. Then it's back to de day to day of deciding whether to rub out the opposition an' de rest.

Well, in no time a year's gone by and the financial report comes in, then it's de edited high spots on the annum's quota of capital offences. No, sorry, boss - even dat ain't so good as it sounds. In fact it was the same as last year an' the year before. Hey - I tell ya, after da first few times I got really bored wid it.

Hey, boss, I can't help feelin' old Mugsy ain't really come that far. Maybe we should go show him de error of his ways - if you follow my meaning. He may have had a novel type of business strategy once but now it's just as mechanical as any board room decision makin'. And like youse always says - rubbin' out people an' booze an' everything is lacking in couth. Now where's dat new modem youse got so we can hack into da Federal Reserve and make some real money, kid?