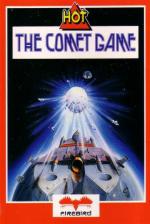 Halley's Comet is a germ bag and it's up to me to save the earth (yet again?). But The Comet Game is a whole different bag and I think I'll sit this one out and let the earth perish if it's all the same to you...

En route to said celestial dirty snowball, the astronaut is in a state of suspended animation, leaving the ship's computer to do the boring day-to-day jobs. It would be more fun to play the sleeping spaceman, but instead you get to play the computer.

It's often been said that computers aren't actually clever but they're good at doing repetitive tasks fast. Human beings on the other hand soon get bored with repetition. This game is structured around the repetition of five simple arcade games leading to a final shoot-'em-up. Yawn!

Quite what Firebird is doing releasing it is beyond me unless it couldn't resist doing a tie-in without having to pay royalties! The comet should now be winging its way back into space. I only wish it would take this game with it!

Yawn! Quite what Firebird is doing releasing this is beyond me...