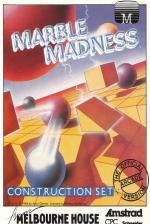 Marble Madness clones have been around for a long while now. Ironically Melbourne House came out with the first one, Gyroscope. Now it's got the official licence, but obviously needed something to make it a bit more special. So what do we have? A construction set!

You control a marble which has to be guided down a course made up of grid blocks, which form flat surfaces and slopes. All about you are sheer drops and other hazards that can easily bring the marble's life to a shatteringly short conclusion. The initial setup has twelve screens to get through - but obviously you can modify them or create completely new ones.

The control of the marble I found awkward and unresponsive, requiring you to work quite hard at the joystick rather than lightly guiding it around. I was also a bit disappointed with the detection system for collisions or drops, which sometimes seemed most unfair. I think the game also suffers from initial comparisons with those that have gone before, like Spindizzy and Bobby Bearing.

On its route down the course, the marble can run into several surprises. Some are nice - like bonus scores - but others spell disaster. The range of dangers has different effects on the marble: bounce it off course, catapult it to its doom, freeze it, shatter it or even swallow it. You don't have a limited number of lives, but each screen has to be finished within a time limit or the game is over.

The hazards are small but nicely animated, ranging from flapping birds and spinning hoops to what look like large woolly socks. One slip and you'll have to start all over again. If you do complete a screen, there might be a bonus score.

You'll probably find the initial twelve screens quite difficult, but you can construct your own easy ones or really fiendish layouts. The screen designer is very easy to use, working on a grid basis, and allows you to position all the features within the game.

You have a variety of basic building blocks to form the route, and then the hazards can be placed wherever you want them. Trial-and-error is needed to find which ones play the best. A lot of variety is possible if you use your imagination. You can also change the various inks and produce successive screens in completely different colours.

Once you've designed a set of screens you can save them to use later and build up a selection of different layouts. You aren't limited to twelve screens, but you are constrained by the amount of free memory, a constant readout of which is given by the screen editor.

The game is okay but obviously suffers from its age. The graphics also are adequate but nothing very special. What the game really stands or falls on is whether the screen designer gives it enough potential variety. I think people will find it intriguing to play around with, and after some thought can come up with many interesting layouts.

Don't buy it just for the game - the designer will need to be put to use to get the best out of it.

Apart from rather dull use of colour, the occasional beep and rather dated gameplay, Marble Madness has much going for it. The tasks are daunting and will have you swearing. The various alien lifeforms are beautifully animated but deadly. But most important is the screen editor: it's first-class. Well, at least I managed to complete a few more screens after a quick bit of revision on them.

There's a colour-define option in the editor.

Overall 70%
P. The only construction set of its kind.
N. Basic game isn't as good as competitors.

It's the only construction set of its kind, but the basic game isn't as good as its competitors.