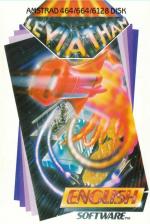 There haven't been any games for the Amstrad on the Zaxxon theme. The main reason seems to be Arnold's scrolling: depending on the method chosen, it's either slow and jerky or too fast for comfort. English seems to have broken the mould.

Your objective is to fly over the diagonally scrolling landscape and shoot anything that moves. Not the landscape, dumbo, but those nasty enemy ships that move around in groups. There are three zones each loaded separately - which have a certain alien ethos about them. That's okay. What's not good for the digestive system is the hordes of enemies: blue ones, red ones, multi-coloured ones, see-through ones. Many have haphazard flight paths, making it a tough job to stay alive. And that's it. Survive the levels and proceed to the next zone, survive the levels and proceed...

Loading the game treats you to a driving three-channel beat. Nothing astoundingly new, but pleasant nonetheless. Start the game and wow! The landscape graphics are stunning, albeit mono-coloured. Lack of colour is balanced by the alien ships when they arrive if they stay on screen long enough and if you live that long. Their movement is difficult to follow. And, due to the perspective, it's very hard to line your craft with theirs to get a shot in. Dodging them is harder still: the controls are sluggish and not immediately obvious. Add to that a craft that suffers from inertia and... aarghhh!

English has managed a half-decent scroll. I say half-decent because, when your ship is travelling at normal speed, the landscape judders. In pursuit, however, everything flies by - smooth as silk.

I was disappointed by this one because it promised so much. Everything is there except decent control over the spaceship. It's just too slow to be enjoyable and causes frequent deaths. The collision detection also seemed way off at times. A lot of practice will be needed if you're going to get far, but that may prove rewarding.

Not always easy to pick the aliens out.

Sonics 78%
P. Driving beat and in-game effects excellent.
N. The style is getting a bit repetitive.

Staying Power 63%
P. Lots of levels and aliens if you can persevere.

Lots of aliens, lots of levels... A lot of practice will be needed if you're going to get far.