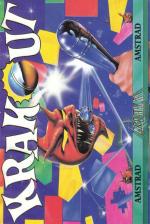 I've got no idea why Breakout games have suddenly hit the market again, but you'll have gathered from the Arkanoid review that I for one am glad about it. Krakout isn't as good in my opinion but has a number of different features that you may prefer. It's also extremely addictive and well worth a Rave.

In Arkanoid the bat appears at the bottom of the screen, but here the bat can be positioned on either the left or right of the display. The graphics are a lot chunkier than its competitor, but you may prefer that. The less impressive graphics are a trade-off for having 100 screens of action.

The aim is to remove all the bricks on a screen to enable you to move on to the next one. The bricks come in several varieties, some taking one hit. others two or more, and there are some indestructible ones as well. They're arranged in different patterns on all the screens, but because of the chunky graphics they tend to be less imaginative than the ones in Arkanoid.

When some bricks are hit they spin over to reveal a letter. If you hit the brick again, it gives you a bonus power in the same manner as catching a capsule in Arkanoid. There are nine different effects produced, the most recent one usually cancelling out any previously gained. Four are the same as Arkanoid - ball sticking to the bat, slowing the ball down, extra life and expanding the bat.

The other five are different. There's a bomb which destroys adjacent blocks, a shield that appears behind the bat enclosing the playing area, a missile that will destroy a column of bricks, doubling your score, and doubling the bat so that you've got one in front of the other.

You get additional balls for every 10,000 points scored. This is handy on screens with indestructible blocks because every hit on them gives you a score, and sometimes the ball may even get stuck in a pattern until an alien knocks it out of it.

The game gives you more options than Arkanoid with variable ball and bat speeds and control methods in addition to choosing whether the bat goes on the left or right of the screen.

If this had come out at any other time, I wouldn't have hesitated to recommend it and I still think it's a good game. I do prefer Arkanoid but you won't be disappointed by this either.

Another game along the Breakout theme. You can set up much of the game to suit your taste: unfortunately you must start at level 1. The ball gets trapped on occasions, but after a while something will either eat it or knock it on its way again. I enjoyed it immensely - its colour and sound effects are pleasing.

Gremlin is to release the Krakout Construction Set, with an additional 100 screens. And, if the title is anything to go by, you will be able to create your own levels. £5 on cassette and £10 on disk.

Some of the bricks get lost in green, but on the whole is playable.

Staying Power 82%
P. 100 screens to get through.
N. Not as varied or imaginative as Arkanoid.