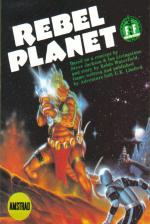 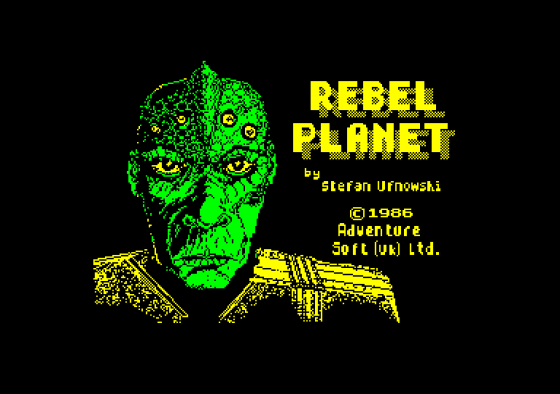 Adventure Soft is very lively concern near Birmingham masterminded by Mike Woodroffe of the old Adventure International software house. Mike is, however, anxious to dispel any associations with previous releases but even so I feel it's worth mentioning the connection because AI was nothing if not prolific in its output (in its day) and I have high hopes of this new company.

Adventure Soft has the game rights to Isaac Asimov's range of books, and the company also puts out games based on the Fighting Fantasy series as devised by Steve Jackson and Ian Livingston. 'Tis from this latter stable that Rebel Planet emerges.

The game was written by Stefan Ufnowski and Roger Taylor of Adventure Soft and features some very attractive graphics. The screen layout is in some ways similar to earlier Adventure International titles: a horizontal split display with a neat graphics window and a scrolling text area below. There the comparisons end, however, since the vocabulary is quite a bit larger than earlier AI releases about 400 words and the parser handles some more complex inputs - GO WEST AND EAST THEN OPEN THE DOOR for example.

The graphics are very attractive and include some animated sequences. As you begin the game on board the merchant ship Caydia, you will see the stars shooting past the command module window, while at other points of the game various monsters or objects will flicker into life while you wonder what to type in next. The animation isn't exactly stunning, but it undoubtedly adds something to the overall feel of the game.

The plot in Rebel Planet involves your finding your way to a 'queen computer' which is controlling the Arcadian Empire troops who are invading the galaxy and threatening civilisation as we imagine it. The biggest problem involves liaising with your ship's pre-programmed flight path: just occasionally you'll find yourself stranded on a planet as the Caydia happily jets off to another destination. You can, however, delay take-off in a dire emergency, but this feature can be used only once in a game.

I enjoyed playing Rebel Planet. It's not the most astonishingly innovative game around, but the puzzles are logical and there's enough here to keep you going for a few days. I liked the idea of having to contact other spies for information, and the spaceship schedules caused additional challenging problems. However Adventure Soft's policy is to stick to sure-fire commercial successes, and to some extent I believe that the company's adventure system (which saves time and therefore money!) is slightly lacking in inspiration: 400 words isn't a very large vocabulary by today's standards and there are no "RAMSAVE" or "OOPS" options, for example, though I hear that these are to be introduced in later titles.

Watch out for reviews of Adventure Soft's latest titles in the next issue. In the meantime, you could do worse than crash the 'queen computer' in Rebel Planet.

I liked the idea of having to contact other spies for information, and the spaceship schedules caused additional challenging problems. 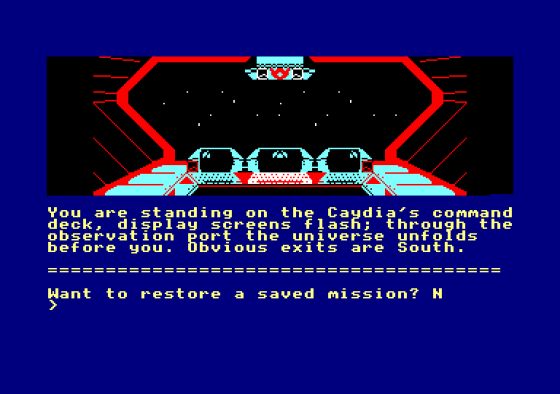