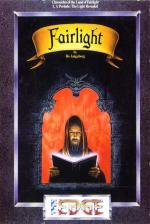 There's a positive wealth of excellent arcade adventures around this month with not only Get Dexter and Batman to puzzle over but this conversion from The Edge. It's in the same sort of 3D mould but there are plenty of original elements and puzzles to keep you guessing.

The game is set in a castle infested with guards and other supernatural defences that try to prevent the hero, Isvar, from achieving his quest. That quest is to find the "Book of Light" and release a sorceror from his imprisonment in the tower of the castle so that he can in turn free you from the castle. You aren't told much more than that - just the controls and a few objects that you may encounter. The rest has to be worked out for yourself.

Isvar appears in an open courtyard where you get first sight of the scenery that appears in most of the game. The stone walls rise very high in the background with a patterned floor which varies in different locations. Sometimes it is stone, wooden or patterned with an appropriate walking sound for the different surfaces. Large wooden doors and other sorts of opening connect between locations and walking off the edge of a screen may also reveal another section.

In some areas there are many objects and pieces of furniture lying around. Some of these can be picked up and used, others moved about to get at things. Isvar can carry up to five objects, although heavy objects like a barrel can only be carried on their own or with something light. There is fairly free use of objects allowing you to carry them between rooms, stack them up, jump on them and push them about.

Pushing can be quite important because when Isvar collides with a static object, it will give it some inertia so that, depending on its weight, it will slide away from him. Particularly light objects may skid away from him, perhaps to be lost underneath a table or other surface. This means you have to be particularly careful in moving things around and picking them up.

As Isvar explores the castle, he has to try to preserve his life force. This counts down every time he bumps into one of the castle's defenders and ends the game if it reaches zero. It can be replenished by finding the right objects and using them. Decanters, bread and chicken pieces can all increase the life force by 10 points but need to be used sparingly because they don't reappear.

Isvar's main weapon is a sword with which he can hack away at anything in front of him. This won't work on all the enemies in the castle, though, and even while he is attacking them his precious life force will be going down.

Solving the game will take a long while but there's plenty to explore and investigate along the way. The graphics are detailed but lacking a little in colour and variety. There isn't a great deal of animation but there are some nice monsters and locations with plenty of them in.

In another month, without games ike Batman and Get Dexter, this would have seemed a truly excellent game. This month, it comes across as just very, very good indeed. Isvar is an engaging fellow, even if he does begin to sound like a horse as he trundles around his castle. There's a good variety of opponents and puzzles, so you won't be disappointed if you like a good 3D arcade adventure.

An arcade adventure with the emphasis definitely on the adventure side, this game does not suffer just from the comparison with the other glittering releases this month - it also suffers from being a Spectrum conversion. The sad fast is, the colour looks like an afterthought. The puzzling is where the real interest lies, however, and this is just superb.

N. Lack of colour and variety makes it look a little drab.

Not bad at all - you can see your way around without difficulty.

Testing puzzles give this game depth, and there are detailed and atmospheric castle graphics too. A good combination of fighting and brain work.