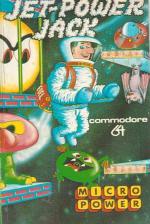 There are plenty of games of games around where you have to jump your character from one platform to another across the screen. What is different about this one is that Jack can not only jump, but also fly with the help of his turbopak.

This means the platforms can be much further apart than is usually the case, and at the higher levels some very tricky manoeuvring is needed to get from one to the next.

There are five levels, and at each level you have to guide Jack from one side of the space garage in which he has been imprisoned to the other and back again five times, to collect fuel pods for his starship. You can choose to start at any level, a nice feature, but it is advisable to master the early levels before attempting the later ones.

The graphics and sound are up to the high standard I have come to expect of Commodore games, though not in any way exceptional. The game, though not conspicuously original, is a very good one of its type, and great fun to play.

The game, though not conspicuously original, is a very good one of its type, and great fun to play.