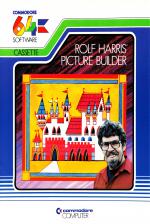 This package consists of two cassettes; the Picture Builder program, and a selection of pictures produced with it. Loading all of the sample pictures was a time-consuming procedure - three of them are shown on the packaging. Surely it would have been easier to show them all leaving out the second tape.

The sample pictures give you a good idea of what can be achieved if you have patience and skill. They are block graphic pictures, half produced with the CBM character set and half with a special set contained in the program. The CBM pictures are better than the others, some of which - the portrait of Rolf, for instance - are barely recognisable.

The pictures are drawn with a joystick, by selecting a colour and a character from those shown on the screen. Then you move the cursor to the required position and press the fire button. The procedure is simple, my children managed to produce some patterns, though not pictures.

Instructions are given for saving the finished pictures on tape or disc, and for re-loading them with or without the original program.

The CBM pictures are better than the others, some of which - the portrait of Rolf, for instance - are barely recognisable.
Logout