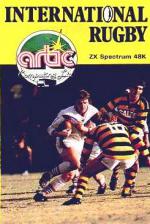 Ross: I say chaps let's have a game of rugger at least it's a real man's sport. None of your wimpy Everyone's A Wally stuff for us, eh? Right, on with the shorts and on with the matcho.

International Rugger's another sport simulation of the type that's so popular at the moment. We're here for the Home International Rugby Tournament with the choice of siding with England, Scotland, Ireland, Wales or France. And your job? Even a rugby player could wrap his brain cell round this one - you just have to win the Triple Crown or the Grand Slam.

You have the choice of playing by yourself or against the computer and you can make it hard or easy on yourself. There's everything you'd expect in a real rugby game - drop kicks, tries, conversions, line outs, scrums, the lot except for bruises and broken bones!

And if you don't know a rugby ball from a ball bearing, don't despair - you can always give it a go on the practice mode. For a sports simulation, the graphics and the playability aren't up to the standard of, say, Imagine's Basketball but then that's a completely different ball-game. If you're a rugger fan then you'll still have fun chasing the ball around the screen. 5/10

Rick: You control these little people three pixels high, bearing no resemblance whatsoever to rugby players - and I loved it! 7/10

Dougie: You control these little people three pixels high, bearing no resemblance whatsoever to rugby players - and I hated it! (OK, who's been looking over whose shoulder? Ed). 4/10

You control these little people three pixels high, bearing no resemblance whatsoever to rugby players - and I loved it!