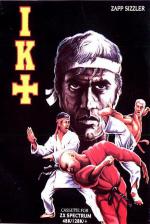 Chop! Slash! Kick! Gouge! And why not?! Combat games seem to be coming back into style, if anything; just when you thought it was safe to change out of your pyjamas, International Karate Plus nuts you from behind.

"Call it a sequel, and you'll end up flat on your back," claims the advertising blurb. Well, *it's a sequel, yah boo!* and that's all there is to it.

The gimmick is that unlike the original International Karate, where you had the standard one opponent at the time, IK+ (as we kung-fu masters call it) gives you two simultaneous opponents to demolish, either one computer-controlled and a second player using the keyboard or both computer-controlled.

As the sun sinks slowly in the background, your task is to do as much damage as possible in each thirty-second round. As usual, there are sixteen different moves controlled by joystick or keyboard, including back flips, face kicks, low sweeps, stomach punches and the "Glasgae Kiss", the auld heidbutt.

Scores are awarded according to the viciousness of your attack; 800 for a Front Face Punch, for example, but only 100 for a Stomach Kick from behind. I should think so too. You also get "combat points" displayed as coloured discs, and the first player to attain six points wins the round. The player with the smallest score is then O-U-T spells out. Not a bad effort then, but unlikely to create new fans for this type of game.