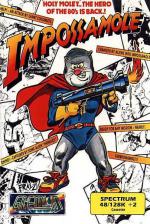 By far the worst offender, deserving a good back-room mattress stomping from the Gaming Police are the Deadly Bats of Ultimate Death. These apparently innocent creatures flap about and fire bullets at you. No ordinary bullets these. In fact, they seem to follow entirely different rules to everything else in the game. Instead of draining your energy, as even the most deadly and enormous foes do, they kill you outright on their first contact. Game Over. No second chances.

There really isn't any excuse for such flaws in game design. It simply looks as if the pre-prod game was examined, deigned to be too easy and these leathery nemeses were inserted as half an after-thought.

Later levels feature other equally deadly beasts, and while some are more decently positioned, this sort of instant game ending strikes me as a bit unfair.

Moat of the game, though, is perfectly enjoyable in a slightly routine sort of way. Your aim is to explore the undeniably large levels of a dangerous land in search of cash. To cope with the denizens of the world you're exploring, you're equipped - at various stages of play - with bombs, a bazooka and, if the worst comes to the worst, your bare paws. You've also got a super weapon which kills every foe on your current screen. Needless to say, these are few and far between.

As far as I could tell, there's no way of telling how many bombs/bazooka rockets you've got left. This, inevitably will have you in many a tricky situation, utterly and unexpectedly cornered.

And another thing. I know that the Mole games are set in mystical magical worlds and I realize it would be pedantic and petty to expect absolute realism, but some things are still a little queer; why is the mole bigger than a human? Why do virtually all characters need to be shot twice (some even five times) with a Bazooka before they lie down? And why, when jumping, do you continually fall off ledges which you clearly reach?

If you're a fan of the genre, then Impossamole may be right down your tunnel. It offers a stiff challenge, full of colourful graphics, and the sort of hop, skip and jump progress which requires meticulous planning. Personally, I found it a bit of a drudge.

Nice break from humourless death and destruction. Bit low on the thrill front.

Nice break from humorless death and destruction. A bit low on the thrill front.