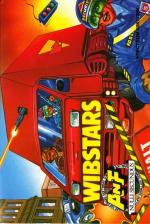 Oh dearie me. Who let this one out? Someone somewhere, probably in the pub, decided that it would be funny to do a game which parodied the computer industry. Is it funny?

Well, do you think that calling the company Wibstars instead of Websters (a real company) is funny? I find it tedious.

When you try to base a game around a joke you have in the pub the chances are it isn't going to hang together as a game. Wibstars is actually several games in one, another bad sign, the answer to not having one good idea is not to put together five bad ideas.

The object is to make computer products and then sell them at a profit. In practice this means playing three or four games which have no special relevance to the game idea and in contrast bear quite a lot of relevance to other peoples ideas.

For example: in stage one you choose, with your allotted budget what goods you will sell - a combination of discs, tapes or Spectrums. They cost different prices and you decide which combination is best. How do you select them? Using an icon/fork-lift truck arrangement straight out of Ghostbusters, then you have a screen where you try to pick up goods in your lorry - this involves driving between different tubes down which products are falling and catching as many as possible.

Next up is a section right out of half a dozen recent road games where your lorry drives to the shops, watch out for a car in front of you which drops junk, finally we get manic Miner meets everything else as your product has to ascend a series of ladders and platforms, via lifts and boxing gloves and make it to the shop. Your little man who can help the product on his way actually looks like Miner Willy.

The graphics are passable but, honestly, I can't believe A 'N' F is serious with this one. Avoid, utterly, completely, totally.

Horrible hodge podge of several budget games, based around a joke that was never funny. Don't even think about it.

Horrible hodge podge of several budget games, based around a joke that was never funny. Don't even think about it.