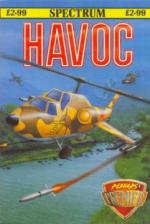 Well, it's not exactly havoc - it's not fast enough to qualify, but it's a pretty good shooty-blasty bundle of helicoptery devastation, that's for sure.

This is supposedly an attack helicopter simulator, but in fact it's a vertically-scrolling shoot-'em-up which could just as well have been called "Alien Helicopters from the Death Sun" or 'Mr Helicopter Goes Shooty Shooty". You get a choice of two choppers; the Russian Havoc, an Mi28 armed with 23mm gun, Spiral anti-tank rockets and SA-14 air-to-air missiles; or an American Apache, a similarly frightening gunship. The choice doesn't make much difference to the look of your chopper or indeed to the gameplay, but at least it gives you a variety of targets; before play starts you are shown various US and USSR fighters and the idea is to shoot down only the enemy, obviously.

Scrolling is not amazingly fast, but the backgrounds are very nicely detailed, featuring gun emplacements, moving tanks, anti-aircraft guns, buildings, barricades, rivers, fields, trees and pyrimidical structures. Just to be on the safe side, blast the lot.

witch from one weapon system to the other using the space bar; guided missiles are aimed to their target by left-right movement of the joystick.

Though the action is very monochrome, good design means that enemy targets and missiles are clearly visible, so you can't say "I didn't see that one coming!" There are seven war zones to complete, and along the way you can collect replenishment packs for damage, lives, rockets and missiles. There are weapons and life bonuses at certain score levels, but if you shoot down friendly aircraft you lose bonuses, and friendly aircraft will now attack you, so don't do it.

There's a thumping great helicopter gunship to contend with at the end of each level, after which you can choose one of two airstrips to land on, to decide your next mission.

Jolly good fun, really, not spectacularly fast or original, but nice looking and a good way of passing a boring afternoon.

You don't have to race to get this one but a gentle jog might be in order!

Jolly good fun... Not spectacularly fast or original, but nice looking and a good way of passing a boring afternoon.