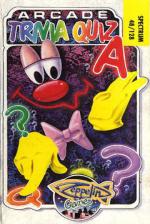 Now you know me, I like a nice bit of trivia, but I take some convincing that games like Trivial Pursuit translate really well onto a computer.

Arcade Trivia Quiz tries to pep things up a bit by adding a bit of split-second fire-button excitement to the brain-scratching, then rather cacks things up by being full of the most stupid mistakes you can imagine.

The graphics are, I admit, raaa-aaa-aaather nice. On the right hand side of the screen you see a pyramid of subject cards, each illustrated with a dinky little icon indicating its subject; film and TV, science, geography, sport and so on.

Up to three players can take part, taking turns to hit the choice key or fire button as the cards flash in turn. If you don't choose a subject within about eight seconds, the currently highlighted card is selected for you. It slides off the screen and a question box appears - the timer bar then starts to slide down and you have a short time to choose one of the four alternative answers by moving the joystick before the timer runs out. If you make a mistake you may be five another chance, or fined and given the choice to restart or continue.

If you get through to the top of the pyramid you get a Cash Run with shorter and shorter times being coupled with greater cash rewards. There's also the odd Jackpot question where you have the chance to double your money. There are several files of questions which are loaded from the B side of the tape. The game's all rather good fun, or it would be if it weren't for The Problem.

The Problem is that the whole game is riddled with spelling mistakes and errors of fact. When asked about the origins of the boars of South Africa, I naturally started sifting through my vast stock of knowledge about wild pigs, realising at the last second that they meant BOERS. Again, when asked "Who said 'Neither a borrower nor a lender be' - Falstaff, Othello, Mcbeth or Hamlet", the true answer is, none of them. It was said by Polonlus. And Mcbeth ought to be spelt Macbeth. And in a pop question, Jimmy OsmAnd ought to be spelt Jimmy OsmOnd. And on it goes.

The ridiculous mistakes in Arcade Trivia wouldn't be so important in any other type of game, but in a general knowledge quiz these things ought to be done proper. Perhaps Zeppelin's programmers ought to indulge themselves in a little spelling quiz?