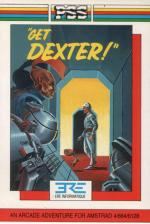 The French have arrived with Get Dexter, a product so classy that many English software houses will have to sit up and take note. It's attractive, addictive, difficult, funny and with a host of special features that will stun and amaze you. It's an arcade adventure that will test your skills to the limit as you control an android in his search for the codes that will allow access to the computer controlling the galaxy.

Dexter the android, has to get the computer in order to save his colony, XUL 3, from an impending war on earth which would destroy both the computer and the colony. To get it, he has to obtain a code composed of eight sections, each section being held by a professor. You have to find the professors, who are all in different rooms, and find how to extract the code from them.

The action takes place in 3D rooms that are so packed with colour and action that you'll wonder what all the fuss over Ultimate's Filmation technique on Knight Lore was for! The game is written using mode 0, which to you and me means up to 16 colours on screen at once. Normally this would mean blocky graphics but, as in Sorcery, so much work has been put in to them that they are detailed as well as colourful.

Dexter is well animated and, more important, quite speedy as he moves around the rooms. He makes his way between them via doorways and corridors. These are sometimes blocked by sliding doors which have to be opened using colour-coded key cards. Some doorways are located high on the wall and so movement is restricted both by the need for keys and the ability to actually reach doors.

By far the greatest hazards, though, are the various robotic and human occupants of the complex who will do their best to get in your way and drain Dexter's energy. The robot guards come in many different guises but are all drawn in shiny chrome and delightfully animated as they scuttle around the place. These can be killed using specific objects, different weapons dealing with particular types of robot.

The humans Dexter encounters come in three shapes - the professors, manic blonde lab assistants and the vicious, green-mohicanned punk who first appeared on the Macadam Bumper loading screen. The lab assistant and punk will chase Dexter and drain his energy but they can be beaten off by giving them the right object.

The professor is a different challenge altogether. He won't chase you but will still drain energy when you touch him. The rooms they appear in are always well guarded so that shortly after entering them an alarm goes off and homing robots swarm in after you. With all that going on all you have to work out is how to get the code out of him.

That precious commodity, energy, can be replenished at "holophonic cabins" which should prove a very uplifting experience.

In nearly all rooms there are objects and pieces of furniture that can be pushed, pulled, picked up. dropped, stacked, jumped on and generally messed about in order to get to vital objects and doors. This is a real fun element since you have immense freedom as to what to do with things - you can try anything, anywhere, anytime. Floor pads can be interesting as these can operate doors, release guards or spin Dexter about losing him energy. There are lifts as well, if you know how to use them.

Dexter's constant companion throughout all of this is Scooter, a podocephalus consisting of a foot, a head and a pogo-ing movement pattern. He bounces merrily about the screen doing nothing helpful and generally just getting in the way of everyone. However, if you whistle him, he'll come to heel and you can use him to jump on to reach things in the absence of furniture. He will also warn you of slippery floors by bouncing about them on his head. Apart from anything else though - he's cute.

This really is a superb piece of work. It has marvellous graphics and animation, good title music and free music on the tape's B side, fast action, great puzzles, cartoon instructions, bags of humour, good personalities and hosts of surprise features. What more can you want?

Was there a clause in the Channel Tunnel agreement about us taking their software? If so, we got a good deal. This game is magnifique. There's so much to it that it will provide a long-term challenge for anyone, even people who've been practising on British arcade-adventures for the past two years.

If you're looking for graphic perfection, insane humour and a huge task all in one game, this is it. Enough said.

Important aspects of the game are colour-coded, and the shades aren't very easy to tell apart. More importantly, you miss the bright, imaginative use of colour. It's still amazingly good, though.

P. Colourful and detailed screens and animation.
P. Lots of puzzling tasks to figure out.
P. Many objects and furniture to move and use.
P. Plenty of humour in instructions and game.
P. Special features that surprise and delight.
P. The only podocephalus in existence.

At last it's happened - a European Mastergame. Amstrads (Schneiders) are the most popular computers in France and Germany and, with such a demand, it was inevitable that they start producing high quality software. We're now starting to see the first of that and it could just be the start of a cross channel avalanche of titles.

The US invasion has often been seen as a threat to the British software industry but with the traffic going mostly the other way with the European market it means we will tend to get just the cream of the crop. The industry should only benefit from that influx and the games' players will certainly enjoy these new products.

One of the things that really makes the game special is the attention to detail. Lots of little touches are thrown in which are a delight to discover as you explore your surroundings. Just when you think you've seen everything, it will throw out another little surprise.

Telling you about them would spoil the fun, but to whet your appetite here are a couple of examples. When you manage to destroy a certain type of robot it will explode with a large splash, leaving a pool on the floor on which Dexter will skid and slide on the seat of his pants. There is also a room where, when you try to walk towards the doors, a metal gate hammers down in front of you. You can get out - but you'll have to buy the game to find out how.

This is amazingly good... Colourful and detailed screens and animation... Lots of puzzling tasks to figure out.