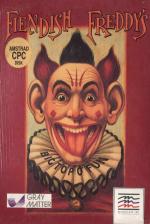 Hurry, hurry, hurry, because the greatest show on earth - the Big Top O' Fun - is about to begin. Unless, that is, Fiendish Freddy has his way...

The happy-go-lucky circus folk have hit lean times and owe the big bad bank bundles of bucks. What's worse, the bank wants to tarmac over the site and turn it into offices, putting you on the dole and depriving thousands of children of the magic that is circus.

There's one last chance, a chance the circus has to take. There's time for one more big fry show, the chance to raise more than $10,000 to pay your way and thus save the day. The bank, too, is aware of this and has hired the infamous East Coast hitman, the clown prince of crime, Fiendish Freddy, to ensure the show must not go on.

You must complete six acts, each more daring and more dangerous than ever before, if you're to put bums on seats and pay the bills. Yet Freddy has a foul and foolproof plan to frustrate each performance, so beware as you enter the dangerous world of the high-divers, trapeze artistes, jugglers, knife-throwers, high-wire walkers and human cannon-balls.

A multi-event game, Freddy follows in the footsteps of Games and Daley Thompson Decathlons of days past, using the circus as its base instead of sport. Each event builds cash up to that magic ten grand that can save the circus. A maximum of six players can try to see off the dubious jester, although they can't combine royalties. So, ladies and gentlemen, boys and girls, players and rubber-neckers, cast your eyes towards the ring for the first act.

Take Horace the fearless flying diver higher and higher as he sets pulses racing and the turnstiles ticking. He has to dive from four different boards and perform different tricks all while aiming for insubstantial targets. On Level One he gets a relatively huge barrel, on Two a bucket, on Three he aims for damp sponge and for Four he has to hit a tea cup from about five miles up.

Freddy seeks to ruin this act by flying in using his jet pack and forcing Horace off-target. A true test of waggling, indeed. Horace always makes an impression, more often than not in the circus floor and not on the audience.

This is Jeffy the Juggler's greatest moment. He has four different goes at keeping the objects flying from hand to hand. The unicycling clown is thrown knives, torches and balls by his seal helper. Line up the hands under the object for a catch, waggle to throw them. Drop five and it's game over, but the time limits are generous, so take it easy.

Freddy is at his most dangerous here as he tosses bombs in for Jeffy to catch. The poor juggler had better get rid of them pretty quick if he wants to survive, as the fuses burn real fast. On the Third and Fourth levels Freddy even throws babies in for the hapless performer to catch and then throw back into their prams. Success here requires you to watch fifteen things at once, be able to move them at will and still be able to smile. Oh, the tears of a clown!

As tradition demands, the knife-thrower's lovely assistant is strapped to a wheel, surrounded by balloons, and set spinning. You have to throw the knives to pop the balloons and not the girl. There's a generous time limit, but a distinct shortage on the knife front, so aim using the knife cursor carefully.

Freddy is quite laid back on this one, just putting a spanner in the works by throwing in the occasional leftover bomb to shake you up and ruin the whole show with smoke. He hardly has to do this, though, because the event's a real toughie even *without* the interruptions!

The high trapeze has fascinated audiences since it came to the circus. The Big Top O' Fun's star is Finola, who swings high above the crowds defying both gravity and death. Time her leaps to perfection, making sure she lets go of one bar at just the right moment to somersault and grab the next. She even has to negotiate flaming hoops and paper targets on the way.

Freddy is once again out and about on his jet pack, waiting for the right moment to strike. If she waits for that perfect jump it's not inconceivable that he'll cut her down, so take those chances - she does have two lives, after all.

The tightrope is a disappointment. It's too fiddly and not spectacular. All the walker has to try and do is struggle across a length of rope, making it to the other side. Balancing is achieved by countering any wobble in any direction, and that's it apart form the (overwhelming) likelihood of falling to your doom, so on the whole it's a bit dull.

Freddy does wait in the wings to give you less than a helping hand if things are going too well, but that's such a rare event both you and the audience will be glad to see a different face.

As a finale, the big top folk wheel in their big gun for the human cannonball act. You have to judge how far the powder in the cannon will fire Fernando (for it is he) and the correct angle for the shot to hit the target. Once fired, there's no turning back, so make sure of any calculations about windage and elevation before the big bang.

Freddy will bung a bung in the barrel if you're slow in the decision stakes. So the whole event takes a frantic turn as you try to learn the intricacies of ballistics at Fernando's expense.

The real treat in Freddy is not the games themselves but the humour that pervades the whole show. The manual's written with Big Top hype and the graphics are more 'toons than sprites. All the events have a special humour; the high diver's landings, the wobbly Jeffy juggling on his unicycle, to name but two examples. Even the incidental screens between events are funny, with the Ringmaster's trousers falling down and the judging panel doing Three Stooge routines before they give a verdict.

Freddy acts as an unpredictable joker that is played without warning, giving a random and more dangerous edge to the proceedings. He actually makes competing even as a single player interesting, because you never know where or when he's going to strike.

Never in the history of gaming has there been so much real humour crammed into a game, and it lifts what would be an ordinary multi-event game to rave levels. If want a Barrel O'Laughs you won't go far wrong in when you enter the Big Top O'Fun.

A graphical extravaganza. A novel plot and wicked humour lift what could otherwise have been yet another multi-event sport-'em-up into something special.

The circus is still magical in green.

Grab Factor 91%
P. A winner right from the off.
P. Easy events to understand.

A novel plot and wicked humour lift what could otherwise have been yet another multi-event sport-'em-up into something special.