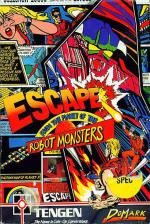 Escape from the Planet of the Robot Monsters

We quite like Domark - they're always a pretty friendly lot - so it's nice to be able to report good things about their games. This hasn't always been the case, as they'll be the second or third to admit, but for the moment they really seem to be on a roll. Hard Drivin', Klax, Cyberball, Castle Master - products to be proud of, every last one of them (even if it took us three days to figure out exactly what Cyberball was meant to be about). And now - hurrah! - along comes a newie that looks all set to knock the rest (with the possible exception of Castle Master) into a cocked hat, in the playability stakes at least. Yes, Escape From The Planet Of The Robot Monsters is a lorra, lorra (lorra) fun.

So what's it all about? Well, Escape captures the rather silly, over-the-top Saturday-morning-down-the-cinema feel of those old Flash Gordon and Buck Rogers serials to a tee (better than Defenders Of The Earth ever did anyway). You know the films I'm talking about - those ancient cliff-hangers with Buster Crabbe sharing a skintight suit with his incredible expanding waistline, and lots of little spaceships whanging about with sparklers sticking out of their posteriors. More camp than Butlins, but great fun all the same.

Anyway, onto the plotline. You and your pal Duke are a couple of buddies in the interplanetary SWAT team, on a mission to rescue Professor Sarah Bellum (geddit?) and oodles of scientists from the artificial factory planet, Planet X. You see, the evil Reptilons (boo hiss!) have invaded, and are turning the hostages into mindless Robo-Zombies, which they then plan to use to destroy the Earth! The object of the game is simple - run around, shooting as many robot monsters as you can and rescuing everyone else you come across (you do this by just walking into them, at which point they're automatically beamed aboard your orbiting shuttle). And that's more or less it - the shortest review in history. It all sounds quite simple because it is - even Granny could work out how to play, and that's part of the appeal.

Graphically it looks just about average - until you start playing. Each level consists of a series of monochrome flip screens (seen at an odd three-quarters angle like those in Head Over Heels and the Last Ninja games) which are universally clean and crisp. What makes it work though are the interesting little details they've crammed them with. The sprites are all small but well-defined and recognisable, and they move around the place at quite a lick - it takes no time at all to find yourself surrounded by robot monsters and in real trouble!

The robots themselves (half of which look like walking Weetabix men) are nicely designed and animated too. Some of them leave energy-giving crystals behind them when they're killed (energy for your gun, that is, not for you) while food cabinets (and also cupboards containing extra bombs) can be broken into and raided if you know where to look. It's often a good idea to shoot anything that looks worth shooting anyway - lots of computers and things contain extra points at the very least.

Your gun (a simple affair though you can upgrade it later on) works a treat, as does the bomb effect (represented by a giant guff of smoke around your trouser region - straight out of Viz!).

The hostages (hippies or girlies, judging from their hair-styles - I couldn't quite tell which) are suitably useless too. Most of them are still badgering away at their machinery while you rescue them as if nothing's happening (!), while the ones trapped in glass cabinets - which you have to work out a way to open - seem half-way to zombification already! (By the way, I'm not trying to say that either girlies or hippies are useless at all - though most of the hippies I've ever met have been - but that as hostages the scientists in this game are ideal, totally unable to help themselves).

Planet X (the place you're trying to clear of human-kind, remember?) is made up of several sections (or levels) each divided up into a series of platforms. You make your way around these by a series of escalators and ladders - the escalators needing to be started by a switch before they'll do anything. Get to the end of the level and you'll reach a teleport to take you to the next one. (Sadly the maze sub-level that cropped up here in the coin-op has had to be left out of the Spec version.)

There are lots of lovely little touches slipped in throughout the game too - try walking off the edge of one of the platforms, for instance. You won't fall, but'll be left hanging there from the edge, waving your legs about before you drag yourself back up again. (Is that why they call them 'cliffhangers'? Ho ho.) Some of the problems you have to get past are pretty tricky too - mastering the joystick controls takes some practice, but it'll all teem worth it when you find yourself surrounded by monsters on all sides, or faced by a particularly tricky trap. Occasionally there's a slight puzzle element too (mostly in the form of working out what you have to shoot in order to open doors) but they're unlikely to tax you too hard.

And that's more or less it. Faults? Well, it can all be a bit samey, I guess - the levels look similar (bar the colour scheme) and the giant end-of-every-three-levels Reptilon nasties (well, giant in that they're three times the size of you) crop up with monotonous regularity. But two-player mode more or less fixes this.

Basically then a very amusing and well-developed blaster, with no obvious faults, a lot of character and all pitched at just the right difficulty level. A bit of a corker in fact, and bound to be a big hit - let's hope Domark can keep up the winning run for their next one, The Spy Who Loved Me (a bit of a stumbling block I fear, but we wish the boys well).

A barrel of laughs - very playable, quite fast and full of little graphic touches. Best in two player mode.

Escape from the Planet of the Robot Monsters

A barrel of laughs - very playable, quite fast and full of little graphic touches. Best in two player mode.