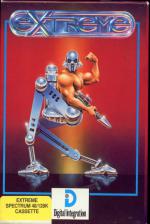 This is a real 'odd man out'. It's not a massively expensive film licence, its not based on a hit coin-op, it's (gasp) not even available on any other format! (Well, okay, it probably will be soon, but they'll be purely secondary to the Speccy version.) it is, in fact, that great rarity, a totally original product. It's also, beyond being just a game, a rather remarkable demonstration of what the Speccy can do.

Take a quick look at the graphics and it might occur to you that this is ever so slightly reminiscent of another, rather more famous game reviewed in this issue - Teenage Mutant Hero Turtles. (And you might be right.) Others of you may spot an even closer resemblance to Dan Dare III or perhaps Tintin On The Moon, Firebird's Savage or (going further back) Trantor - The Last Trooper (or whatever it was called). There's a reason for this of course - Extreme has been put together by Dave Perry and Nick Brunty, the team behind that little lot, who may since have moved onto bigger things (the mega-successful ST Amiga game Supremacy for one) but still love the humble old Speccy, and muck about with it in their spare time. This is their 48K swansong, a game just packed to the brim with everything they'd always wanted to try, and as such has some of the snazziest little effects ever seen on the Speccy.

The game itself is a three level shoot-em-up thing. the basic idea being that an alien ship has crash-landed on Earth, and you've got to help its god-like computer get rid of the nasty alien pirates who've taken over the bulk of the ship. Worse, the ship's defence system has thrown a wobbly and is threatening to self-destruct (which would take half the planet with it). So there's the problem - but how does the game actually work?

Well, the first level is very Dan Dare III-like indeed - splashed with as much colour as is possible on the Speccy against a plain black background (well, not quite plain - there are twinkling stars about the place) to prevent clash. You've got to whizz around, shooting buttons, collecting weapons and opening doors in a quest to restore full power to the computer so it can help you with the rest of your mission. This bit really is full of fancy programming tricks - from using light and dark shades to effectively increase the Speccy's palate up to 16 colours to animating the lava you have to pass through so the whole screen is moving. The screenshots might look impressive, but you have to see the game moving to fully appreciate it.

As for how it actually plays, well, comments from the DDIII and Tintin reviews would be equally appropriate here. It's great for what it is - it's very fast, the explosions are spectacular, and neat touches abound (like the points you've earned for killing each alien leaping into the air) - but you can't help feeling that it would be much more satisfying if there was simply more of it.

The second level is very different, but the same comments apply. Basically, you're now a much larger sprite in an unarmed deep-sea diver suit, splashing around for a spanner or something in the ship's fuel tanks. Inexplicably these are filled with piranha fish and WW2 style mines - all you've got to do is scoot along to the other end of the tank, pick up the spanner, turn round and zoom back. And, um, that's it - the trick is that since you're not armed you have to keep deliberately touching the mines (which act as smart bombs) to get rid of the attacking fish. Very colourful, full of neat touches (like the little whirling propellors on the suit, or the smoothly animated surface to the water) but as a game pretty hopeless. It's basically a shortish journey in a straight line, with only one trick to learn before you can complete it.

Then there's Level Three, and (would you believe?) it's even simpler. It's basically just walking along in a straight line shooting things, finding a computer (or something) and destroying it. As a game it's not really there at all, but luckily it's just as impressive visually as the other sections - perhaps even more so. You control a giant Star Wars-style walker for a start - superbly animated, and quite possibly one of the biggest sprites ever, as tall as the playing area. Even more impressive are some of the things you won't even notice on first playing (like the fact that everything that happens is reflected on the mirrored floor). Visually stunning then, but as I said, almost laughably short and simple as a game.

And there we have it. Technically an incredible achievement, but less satisfying for the gameplayer. This is a real programmer's game, full of tricks and bound to provoke a million 'how did they do that, oh, I see. how clever' comments. Think of it as a fun project, a hobby game packed with effects you really should see, that just happens to have been published. That way you won't be disappointed when you buy it.

Too short and easy, but as a demo of what the Speccy can do it's one of the games of the year.

Too short and easy, but as a demo of what the Speccy can do it's one of the games of the year.