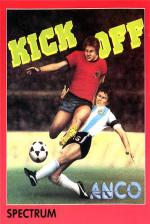 This is a really, really weird one. The 16-bit versions are classics (I think anyone would acknowledge that), but while the Speccy version isn't as good it's still a very different kettle of fish from most footie games. We didn't have any great hopes for it since Anco slipped it out ever so quietly with no real publicity or anything but in actual fact it's quite a pleasant surprise.

So, first up, the presentation - and it's lousy. The little purple and white players are pretty indistinct, there are oodles of graphical glitches and both men and ball have a bizarre tendency to go under the 25 yard line! In fact, this gives it very much the feel of a rather bad three or four year old game. Hardly what you'd call 'state of the art'.

But playability is another matter altogether! I know footie games are normally incredibly popular (even the bad ones) but, personally, I'm not much into them. They've got a strange sort of addictiveness, it's true (even if you're not much into football), but I can't get much fun out of the managerial aspects, graphically there's not much you can do with them and the controls are often hard to get to grips with. And, to cap it all, gameplay is too often stodgy and slow.

That's not a criticism you could make of Kick Off though! For a start it's fast. Very fast indeed. It's almost like ice hockey or basketball (or pinball!) with the game moving from one goal to the other in a matter of seconds. There's no way you're gong to get bored, that's for sure. It's easy to get into too. There's a trial option for you to learn ball control, how to take corners and so on, but, as the controls seem to have been kept as simple as possible you'll quickly want to get into a real game and learn 'on the job'. I did lose 2-1 (ahem), but it was only my first go. Anyway, they give you a choice of five skill levels so all players are catered for. Of course, the real test of these sorts of things is in a two player game, so how does it fare? Well, let's have a little listen, shall we?

"Blimey!". "Oi! Gerroff!". "You fouled me!" "Send him off, ref!". "Yellow card!" "Oi! You fouled me again! You're a dirtier player than Real Madrid!" (From the original soundtrack of me and Davey playing). Yep, it goes down pretty well all right, since it's so fast and frantic, though the lousy graphics do spoil things slightly.

All in all then, a different sort of footie game, a lot faster and easier to get into than usual, but with some annoying glitches and a slightly unfinished look. Still, there;s no denying it's a lorra, lorra fun (especially in two player mode).

Very fast, very playable and very easy to get into, though a bit hopeless visually.

Very fast, very playable and very easy to get into, though a bit hopeless visually.