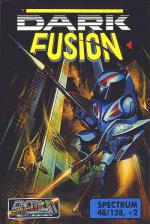 If you think GCSEs are a pain, spare a thought for the poor soldiers who have to pass the stringent three-phase test of the Corps of Guardian Readers... er, I mean Warriors. This test is one of the hardest in the known universe, and Gremlin want you to pay for privilege of suffering it.

To start with, you bravely venture on foot into the horizontally-scrolling Combat Zone. As in R-Type your gun has a power meter - hold fire down to produce a giant plasma bolt. When aliens are destroyed they drop globes which can be collected for a points, add-on weapons or extra jump power.

Situated in the Combat Zone are three flashing Fusion Pods. Enter one of the first two and the player is changed into a spaceship, transferred to the single-screen Alien Zone. Here, a huge alien (different for each level) attacks you and must be destroyed to return to the Combat Zone.

When both large aliens have been eliminated (the easy bit!), you may enter the third pod and the Flight Zone. This is a horizontally-scrolling landscape, infested with small aliens. The fusion pod at the zone's end takes you to the Combat Zone of the next ten levels.

Despite similarities to the brilliant R-Type, Dark Fusion incorporates a more varied mixture of game styles. All the levels are quite colourful and without much clash. The aliens are well drawn and animated, though not as impressive as those in R-Type. To deal with them there's a variety of powerful weapons to be collected, adding an interesting strategic element. Ingame sound effects are limited, but there's a good intro tune.

Dark Fusion is a fine shoot-'em-up, with varied gameplay to live up to its slick presentation. Its appeal is also likely to last, due to just the right level of difficulty - challenging, but not (quite) impossible.

'This is a very playable shoot-'em-up which takes elements from several sources to produce an interesting, well-presented game. Unfortunately, the variety of all the different levels is occasionally appreciated due to the ease with which games are cut too short (ie, you die very quickly! - Ed). I disagree with Phil on this game, the gameplay is frustratingly hard and practice doesn't help that much. For well 'ard gamesplayers only.'

'Presentation is slick, the graphics and animation are good, while sound is just adequate. Some of the sprites in the combat zones are really impressive, but require a lot of bashing - and that's the main problem, gameplay is just too difficult. As in R-Type knowing the attack waves of the aliens is vital, but here you have to know them to such precision the fun goes out of the game. Nevertheless, it's better than Techno Cop.'

As in R-Type, knowing the attack waves of the aliens is vital, but here you have to know them to such precision the fun goes out of the game.