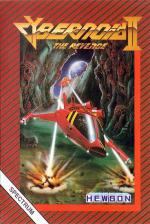 Attack of the sequel people! Cybernoid 2 is nothing more or less than a remix of the impressive flip-screen blaster Cybernoid, by Raffaele Cecco. If you were expecting something completely new and original, forget it; if you're happy with an even bigger and better Cybernoid, you're going to be in Bliss City Wyoming.

Once again, you and your highly dangerous killing machine have been horribly offended by aliens who have stolen your luncheon vouchers or something equally insulting. You set out to massacre them regardless of your own personal safety, and along the way encounter numerous deathtraps, weapons systems and alien growths determined to blow you to bits.

As before, the animation and colouring are immaculate, with very little attribute clash, even in the most spectacular explosions. The background design is similar to Part One, but now the organic bits are even more slimy and horrendous, and the mechanical bits more threatening and futuristic.

The main differences lie in the weapon systems, which as before are discovered by destroying major enemy installations. You still have a limited number of smart bombs which will destroy everything on the screen, and shields which last for a short period and will see you through the most frightening hails of fire.

You'll find, though, that the aliens have become tougher too, probably enraged by the last trouncing you gave them. New threats include guided missiles which drop from the roof, homing in on you with speed and accuracy; pod emplacements which explode into a hail of small projectiles; ramrods which crush you against the wall or ceiling; gravity traps which pull you to your inevitable doom; and horrible caterpillar-like aliens which follow you around the edges of the rooms, trying to squash you in the narrow corridors.

Rather than the straightforward chamber-after-chamber approach of Cybernoid 1, the new game offers alternative exits from some chambers, so you don't have to play the rooms in the same order each time. There are also horizontal "lifts" which transfer you from one section to another.

Your new super-dooper spaceship boasts an even sleeker, sexier design than the original, but you'll be pleased to hear that the old war-horse turns up as an additional weapon, a probe which follows you around guarding your back.

Faultless arcade entertainment, then, not much in the way of originality but the state of the art in shoot-'em-ups.