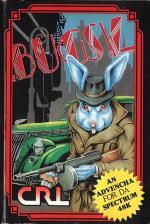 Waddaya, racist? Or is it da tommy gun dat freaks you out, huh? O'll show ya - Happy Valentine's day... DAKADAKADAKA...

Mugsy is weird with a capital W. I've done a lot of things in adventure games over the years, but never before have I had to control the destiny of a blue rabbit - named Bugsy Maroon - climbing the ladder of success in the Chicago underworld of the 1920's.

The game is written by what has to be one of the craziest adventure houses around - The ladies of St Brides School live on the west coast of Ireland. Their stated aim is to recreate the atmosphere of those old books about high jinks/kinks in girls' boarding schools - you know. Trixie Tries it On, Hurrah for the Upper Sixth, Mona, You're a Brick and so on.

Anyway, that's neither here nor there.

Remember Melbourne House's Mugsy? That strip cartoon adventure game where you had to help the eponymous hero make it as a crimelord. Well, Bugsy is what you might call a pastiche of Mugsy - and very good it is for all that.

Our story - or rather, one story, because there are two stories running simultaneously and... I think I'll stop trying to explain, and just tell you what happens. Freud maybe could make you understand, but I ain't him. It begins in the common room of St Brides School. A bloodstained, blue three foot tall rabbit staggers in and prepares to expire on the carpet. But wait, says plucky Trixie! All you need to aid you in your quest is some twit on the other side of a computer screen - which means you, buster.

And so, after this rather strange introduction, you find yourself in the even stranger world of Bugsy Maroon. Chicago in the 1920s, and everything is apparently coloured sepia, though not according to my TV screen.

The game is set out in classic style: graphics window above, text below. Graphics are very detailed and garishly coloured, if a little angular. The neon sign outside the bar even flashes) Text is good, also garishly coloured, and the flashing cursor is a rabbit's head. Location descriptions are long and in many cases very funny.

So when you reach one of the rough neighbourhoods, you get told: 'The kids here are so tough that when they can't find wood they whittle their fingers." At first it drove me mad: I just couldn't get anywhere. Or rather, I could get places, but I'd done everything I could in every place I could get to and I just wasn't making any further progress. Or so I thought.

Then, finally, I lost my temper in the bar, and typed in something I was sure would get me killed - and bingo, I'd solved that little problem and was able to get into the game proper. I don't want to give away too much (let 'em suffer too, says I), but remember that you don't need any weapons to deliver a rabbit punch.

Once I'd overcome my initial shyness around strangers, I was able to make two new friends, Louie and Muscles. Muscles has something you need very badly, and he seems quite happy to sell it to you for nothing. (Oh, by the way, you discover that Bugsy is from Coney island - geddit?)

You can now saunter out of the bar and, properly attired, assault all the local news vendors you can find.

With the money you've earned from an honest day's labour, you can purchase a gat. Now, you might think the obvious next step is to rob the bank - but you really should hire some back-up for that. And you'll have to find some more money from somewhere to hire some hoods...

There are actually two different games on the tape - one on each side. You have to solve Game 1 before you can get the password which allows you entry to Part 2. As I haven't come anywhere near solving Part 1. I can't tell you a thing about it, except that your efforts so far seem to have made Bugsy number 10 in the most wanted hit parade - and he won't be satisfied until he reaches number one.

I could rabbit on forever, but you'd probably start tearing your hare out. Suffice it to say that mugsy is an excellent game, with a great line in wry humour - I was lapin' it up all along. And I haven't spotted any Bugs yet... Nyeah, what's up, Doc?

Fast, funny, zany, wacky, worth it. Buy it before you end up in the harbour with a set of concrete wellies.

Fast, funny, zany, wacky, worth it. Buy it before you end up in the harbour with a set of concrete wellies.