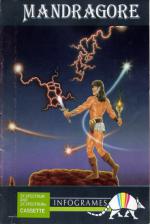 Mandragore is a French game, which has necessitated translation of a rather different sort than is usual in computer programs. Unfortunately, it might have been better had it been left in the obscurity of a foreign language.

It's not that the game is bad, it's just that it's dull and old fashioned - it may well be a couple of years old, for all I know. Mandragore is a computerised role-playing game in which you control the destiny of a party of four adventurers.

First choose your team. For each character you are given 80 points to divide between Constitution. Strength, intelligence, Wisdom, Dexterity and Appearance. Anyone who has played Dungeons and Dragons may recognise something here.

Then you choose race: dwarf, elf, mi-orc, hobbit and human. As far as I can see, what race you choose has little effect on the game.

Next you have to decide on an occupation for each of the four characters you are creating. Options are warrior, ranger, wizard, cleric, thief and minstrel.

Finally you have to decide on sex (an easy choice - male or female) and name. Sex is important because in certain situations you get pictures of your characters: female ones have bulges and head scarves - even the dwarves.

If you don't want to go through the rigmarole of creating new characters the first time you play, you can use a preset team, led by a female human called Syrella. There is also a short story accompanying the game detailing Syrella's attempts to recruit some adventurers to help her find her father's lost temple with the magic flame located on a volcano ...

Once you have your team, you enter the land of Mandragore. There are two modes to the game: one when you are journeying around the countryside, the other when you enter villages or chateaux. In map mode, you move square by square: terrain features include plains, forests, hills, swamps, sea and mountains. You move about by typing in the direction you wish to travel: n, s, e, w. Every so often, you get a random encounter with some sort of monster. You can run away, but there are penalties; otherwise, you have to fight.

On meeting a monster, you get a really rather dreadful graphics sequence which depicts the members of your party (head scarves and all) and the monsters as a series of blocks. If one of your party attacks the enemy, the appropriate graphic zips across the screen and then back again. All very terrible. What's more, if one of your people has part of his/her body the same colour as the background, they both disappear.

If you land on a square containing a village or a chateau symbol, you can enter it. In village or chateau mode you have the awful graphics all the time. Instead of moving square by square, you change screens, each one being a room or corridor. While the village information is contained in the main program, if you want to enter a chateau - there are 10 - you have to find the right place on the chateaux tape and load it in. Very tedious.

When in villages or chateaux there are a wide variety of instructions you can give your characters. To give you a very quick idea of the way it works: hit 1-4 to choose a character who is going to do something; type in two letters for a particular action; type a, b, c or d to choose an object or monster you want to do something to. So 1 at a will be translated by the program as "Syrella attacks the wyvern". In that case it will then add "with:" you hit 1 to 4 again to choose one of the four objects Syrella is carrying.

While the list of possible actions is comprehensive, the whole business is very repetitive and I really couldn't be that bothered. It's also very difficult to actually get anywhere at the start if you create your own team. Each of your characters has 50 gold pieces, for a total of 200 gold and that's hardly enough to buy one little dagger. A bow costs 220 pieces! Maybe you're meant to bargain. I tried stealing everything - it worked fine with the thief in the pre-generated team who was able to nick everything in sight that wasn't nailed down, but when I tried with the thief I'd created he was instantly caught and fined all his money.

If you can't get hold of any weapons you're going to be in deep trouble in the wilderness, as you'll have to use your bare hands or magic. You can kill things by punching them, but it takes an awful long time and your characters are going to get hurt in the process. Magic works well, but after a certain number of magical attacks, your magician blows out, rather like a light bulb, and is dead.

Death is not a pleasant thing: it basically means you are without that character, and as far as I can work out from the game and the instructions, you cannot recruit new characters to fill the gap.

I can't see this being any sort of success, it's just too old-fashioned. It's also too slow. I certainly can't get excited over spending ages killing something that looks like an evil jellyfish but which the program assures me is an owlbear.