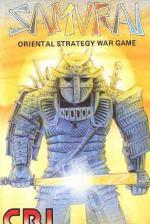 You might think that I review games because I get paid for it, but it's not true (well, almost). Really I do it for love - waiting for a game like Samurai to appear. Something like this just makes it all worth while.

Need some background? Right, here it is in a nutshell. You control a force of Japanese warriors. You have to attack a temple and kill all the warrior monks who are defending it. And that's basically it - simple, clean and fast.

To begin with, you have to pick your forces. Depending on the difficulty level, you have from 200 to 400 points to spend. Mounted Samurai cost 40 points, Ninja (assassins) cost 25 points, a unit of Ashigaru (second rank foot soldiers) 18 points, and a Samurai 12 points. You are free to choose whatever mix you like, so long as you don't exceed the points you are allowed.

Your opponent, the computer, has a force of monks, trained in martial arts and wielding two-handed swords: Samurai monks, apparently regarded as the top warriors of imperial Japan, and young Samurai monks still in training.

You choose your forces by selecting from a range of icons. Move the joystick until the icon you want flashes, hit fire and a unit with that icon on appears in the playing area window which takes up about a third of the screen.

When you're satisfied with the make-up of your forces, then you can start the game. As far as I can work out. there is only one map - but what a map! It's one of the best pieces of static graphics I have ever seen on the Spectrum - in fact, to be honest, on just about any computer including the Atari ST and Amiga.

You see, in the map window, an aerial view of a Japanese temple and the land immediately surrounding it. Everything is perfect - grass, paving stones, chairs, statues, water, wooden planking: someone has taken an immense amount of effort on this.

Dotted about the map are the various warriors under your command, and centred on the temple - which is in the middle of the map - are the enemy forces. Warriors appear as square counters with the icon showing what they are on them. Yours are orange, the ^enemy's are blue.

The computer automatically cycles through your units. When it centres on one. you have to move the joystick until the icon you want is flashing, then hit fire. So if you choose the icon that looks like a pair of feet, that represents movement: you then move the flashing on-screen cursor to where you want your man to go. To the right of the map window is a status screen, which indicates how many movement points he has left, and how strong he is. Strength starts at about 30, and when a soldier reaches one he is dead and removed from the map.

To attack, you move a unit next to an enemy force. Then, when you've moved everybody you want to, combat takes place. Everybody adjacent to an enemy attacks and is attacked by that enemy.

The only exception to this rule is the Ninja, who can engage in ranged combat. Choose the icon representing a shuriken, or throwing star, and press fire; to the right of the map window you see a circle with a white line. Use the joystick or cursor controls to move the line until it's pointing in the direction you want to throw your star, then hit fire again. If you are close enough, then you have a good chance of hitting. Once a Ninja has thrown his star for that turn, he still has some movement points left - so you can throw and engage the target you have already damaged, or throw and run away.

While historically this is somewhat inaccurate, as Samurai were excellent bowmen, in game terms it works very well. You can also call up a second, smaller, map which allows you to scout out the temple. I didn't realise this, and spent the entire game (actually all four I managed to play) in the dark. I got slaughtered - but I probably would have done anyway, as Samurai isn't the easiest of games.

Samurai is not one of the most complex of games, but that works in its favour. It plays fast and it's addictive. Every time you get wiped off the map you keep coming back for more. And the graphics are so good that it's a joy to play. I haven't seen a game this good in a long time.

The only thing that worries me is that it could be a bit limited: but the design-your- own-side mechanics should allow for varied games.

Samurai is absolutely brilliant, superb, and wonderful. I can't wait to see a follow up. A classic strategy game.

Samurai is absolutely brilliant, superb, and wonderful. I can't wait to see a follow up. A classic strategy game.