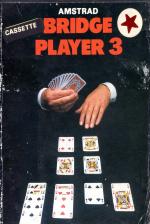 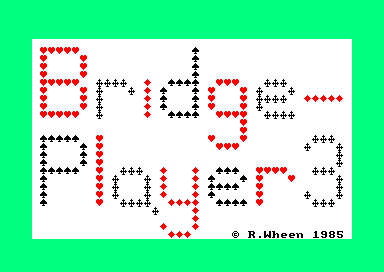 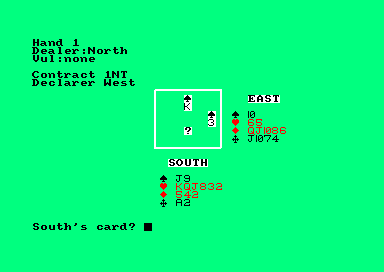 If you want to want play bridge. you've got a slight problem - how are you going to find three other people to play with? A computer bridge program could be the answer - a program that bids and plays three hands, and does the scoring into the bargain. Bridge programs are none too common - good ones are distinctly rare. Prior to the release of Bridge Player 3, Amstrad owners have had to use Kuma's Bridge, a rather weaker effort, or do without.

It's not just a question of low demand. Bridge programs are very difficult to write compared to computer board games. They take a lot of time, and consume large amounts of memory. Bridge Player 3 weighs in at around the 40K mark, making it the same sort of size as Cyrus II or Colossus Chess - both of them strong chess players by human standards. Bridge Player 3 is much weaker - you certainly do not have to be a strong player to hold your own against it.

Of course, bridge is a very different proposition from chess. For a start, there is a sizeable element of chance in the game. You can bias the spread of honours in your favour if you want to be declarer, but there is no way to bias it against you if you want to practice your defensive play - an odd omission.

The real area of difference - and difficulty - is bidding. Here you have to rely on your computerised partner to behave sensibly, and this can be truly nerve-wracking. Bridge bidding is a complex business even with a human partner, and thorough understanding of your partner's bidding system is essential. The documentation is rather light here - the program uses the Acot system, but if you don't know what that is you won't find much help in the manual. It is, in fact, a fairly natural and sensible system, but the program does not apply it with tremendous skill. It seems to make game bids on scant information, or even against the evidence it has. As for slams, CP claim that it will recognise, but not initiate, Blackwood - in practice it jumps to slam so rapidly you will probably not have time.

These sorts of drawbacks are common-place in computer bridge, and should not be allowed to obscure the program's strength in card play.. As declarer you'll find East and West worthy opponents, while in defence North is a useful ally, Strong players won't have much to worry about, but novices should find the program very helpful as practice.

Another area where BP3 comes up trumps is on playing options. As well as biasing the deal you can set the bidding system's no-trump to weak, strong or variable - though the manual doesn't explain this last setting properly - or dispense with the bidding entirely and simply state the contract you want. During the play of cards you can peep at the other players' hands, examine those tricks already played or restart the hand altogether. You can also abandon the hand without score, or claim the rest of the tricks.

There are a few options - stepping back through the play, or conceding the rest of the tricks - which should be available and aren't, but these are hardly serious omissions. A must for all the bridge-playing Amstrad users out there.

Bridge is a game that's played in pairs in which you have to kick your partner's shins to cheat. It's played by retried army officers, ancient vicars and Egyptian film stars. As you will realise, I'm so ignorant that there's nothing useful I can say about this program.

A bridge program loses much of the fun of the real thing because you don't have an unpredictable human to react to. This one won't suit beginners either, unless they get additional information on bidding, which I needed particularly when the computer started making weird bids. Not bad for those who know the game, but otherwise too expensive and too complicated.

N. Poor documentation.
N. Bidding can be erratic.
N. No good if you don't play bridge.
N. A trifle on the expensive side?